Yesterday we had what was probably the last big storm of the “monsoon” season here in southern Arizona. I haven’t quite gotten used to the idea that we have monsoons. This isn’t Bangladesh. I have to take the television meteorologist’s word that the summer weather pattern qualifies as such. 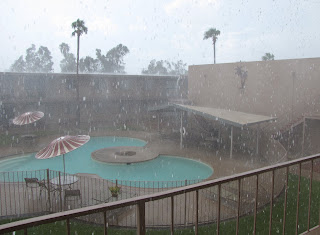 During May and June, the Sonoran Desert heats up to an almost intolerable degree. Literally! Temperatures regularly exceed 100 degrees Fahrenheit. One year in recent memory we had a string of 39 straight days that were over 100 F. This simmering pattern sets the stage for what is to come. The winds change toward the end of June as low pressure replaces the fading high pressure, and moisture is drawn up from the Sea of Cortez. Rains usually follow.

Still, the definition of our Arizona monsoon seems to depend upon who you ask. Some say that when the dew point reaches 54 degrees Fahrenheit, it more or less marks the onset of the summer rainy season. The dew point is the temperature at which air becomes saturated with water vapor and that vapor begins to condense. Others simply assert that the average beginning of the monsoon falls on about July 7. 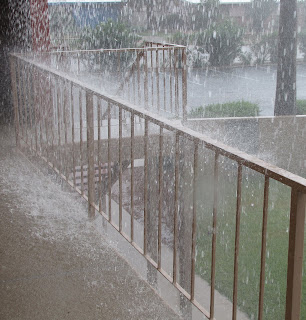 That is not to say that every monsoon is “average.” Far from it. Last year there was almost no rain at all, and this year has not been a great improvement. My immediate neighborhood has seen maybe three good storms with heavy rains. An average year would be more than double that.

The thunderstorms associated with the monsoons can be terribly violent. The storm yesterday included hail as well as rain, plus very gusty winds. A storm a few weeks ago spawned lightning that lit a tree on fire in a nearby park. Some streets here in Tucson are sacrificed to drainage during storms, and I jokingly tell people that I live on the North Fork of Magnolia during the monsoons. 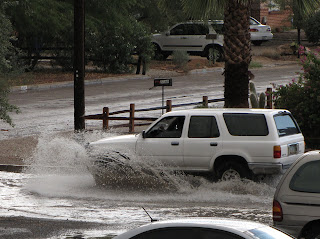 Most destructive of the monsoon phenomena are “microbursts.” These are straight-line winds that can wreak just as much havoc as a weak tornado. Microbursts are essentially “wind bombs” that happen when cold air in the top of a thunderhead suddenly drops to the ground, sending the equivalent of a shock wave of wind in all directions. The winds generated can exceed 70 miles per hour, and the phenomenon can last from five to fifteen minutes. The area impacted is small, however, generally restricted to less than 2.5 miles in any given direction.

The intensity of the monsoon season varies considerably, and La Niña and El Niño events can exert quite an influence, but the rains are vital to preserving the diversity of flora and fauna in the Sonoran Desert. 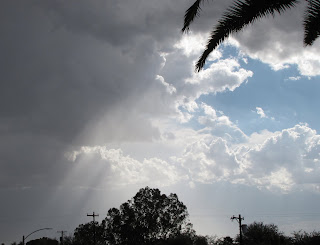