Saturday, September 25, I had to choose among several nature-oriented events around the Tucson area. My selection was the annual Tucson Reptile and Amphibian Show at the Expo Center in South Tucson. While the overwhelming majority of participants were vendors of live reptiles, arachnids, and terraria and other products related to keeping pet “herps,” the educational exhibits were quite enthralling. 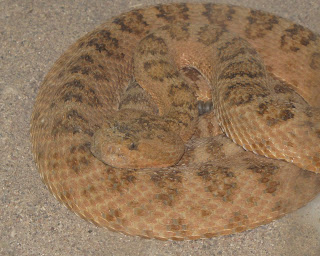 I just looked up the scientific name for that serpent in the book Rattlesnakes of the United States & Canada, authored by Manny Rubio. I purchased that outstanding reference at the Reptile Show as well, and Manny was on hand all day signing copies.

The most impressive exhibits were furnished by the Phoenix Herpetological Society. This organization even runs a sanctuary for unwanted reptiles. I suspect that some of the more dangerous specimens were probably seizures in raids on drug-smuggling rings since trafficking in narcotics and exotic pets often go hand-in-hand. Macho dealers often want pets symbolic of their toughness, and/or dangerous pets to guard their stashes of illegal substances, cash and weapons. In any event, the animals the PHS brought to Tucson were truly amazing.

I am not readily intimidated by reptiles, but one specimen had me a little nervous and totally in awe. It was a Reticulated Python, Python reticulatus, raised from a hatchling by the gentleman standing next to it at the exhibit. The snake is now seventeen years old, just shy of 19 feet in length, and weighing in at 260 pounds. I estimate the snake’s head was at least as large as my size 7 ½ shoe. The snake’s name was “Tiny.” No, I’m kidding! 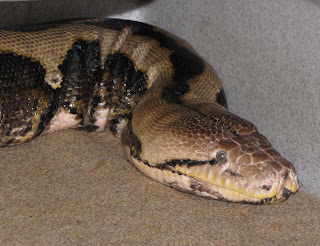 The python was in a compartment on a long trailer that included many other snakes and lizards. Among them was this gorgeous albino Western Diamondback Rattlesnake, Crotalus atrox. 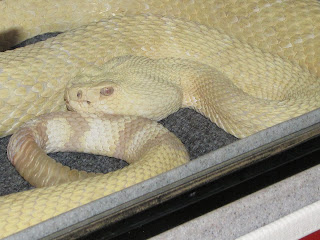 Aberrations like this don’t usually survive long in the wild, but they make excellent ambassadors for their species in an educational venue.

Most of the animals in the show were in plain enclosures that facilitate easy cleaning and optimal viewing by the public (no place for the reptile to hide). This did not make for the best photo ops, but I was happy to get some of the results I did given the obvious “in captivity” look, smudges on the glass from countless children’s noses and hands, and often poor lighting. Still, a King Cobra, Ophiophagus Hannah, has an overwhelming presence in any setting. 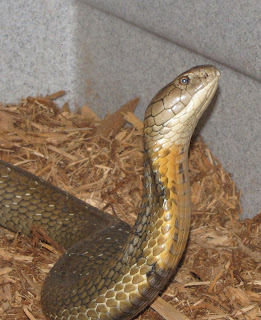 A couple of small crocodilians and an enormous Alligator Snapping Turtle complemented the snakes, but it was the vipers that I found most amazing. Take this Mangshan Pit Viper, Trimeresurus mangshanensis, for example. Found only on Mt. Mang in the Hunan Province of China, it is literally “something you don’t see every day.” 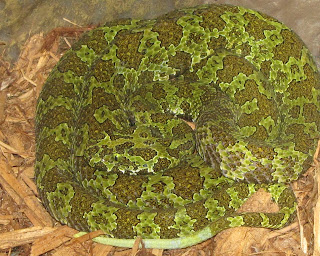 Likewise, this bright yellow example of an Eyelash Viper, Bothriechis schlegelii, is best encountered behind glass in a nicely-landscaped terrarium, as opposed to wrapped around a branch at eye-level along a jungle trail in Central or South America. 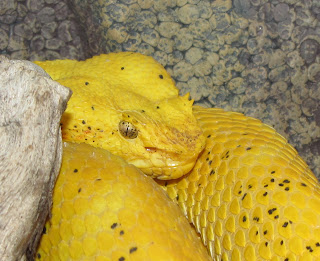 There are more images of other snakes over at my Flickr photostream. I’d like to thank my friend Leigh Anne DelRay for reminding me of the show to begin with, and sharing the experience with me last Saturday. I encourage everyone to visit their own local reptile show and take a friend or young person with them. It can make a lasting impression to come face-to-face with native and exotic wildlife at such events.