A Zoo With a View

I would never have known about the Cheyenne Mountain Zoo were it not for my girlfriend, who works as a zookeeper there. This remarkable attraction advertises itself as the only truly mountain zoo in the United States, and it lives up to that billing. Sitting literally on the side of Cheyenne Mountain at an elevation of 6, 800 feet, it offers a panoramic view of Colorado Springs and the plains that stretch beyond the city. 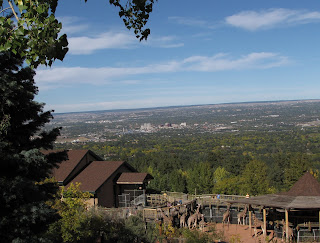 It must be one of the oldest zoos in western North America, too, founded in 1926 by mining mogul Spencer Penrose. He incorporated the facility in 1938 as a non-profit public trust. This is another unique aspect of the zoo: it is privately run and takes no tax dollars for its operation, relying solely on admissions, memberships, donations and grants for its existence and continuing expansion.

The zoo hosts over 1, 000 animals representing nearly 200 species. Some of these are seasonal exhibits, such as the alligators, but thirty-one are participants in global Species Survival Plans. The zoo is best known for its herd of giraffes. These tall animals are a real attraction that visitors can feed from elevated boardwalks around the exhibit. Their popularity sometimes causes....well, “giraffe-ic jams.” 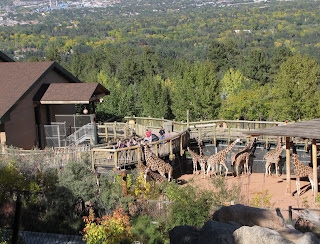 The zoo views are more than scenic, though you can take the “Mountaineer Sky Ride, ” a ski-lift style incline, for the ultimate experience. The zig-zag pedestrian pathways between exhibits allow one to often have a nearly 360 degree view of some of the animals. I was startled to find myself only a few feet from a Mountain Goat just below me when I was watching a magpie in its enclosure. 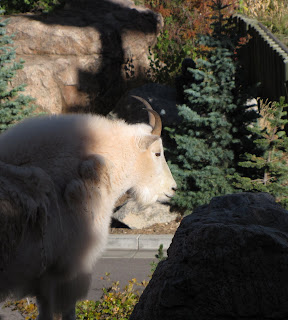 Maintaining accreditation with the Association of Zoos and Aquariums is a constant challenge given the age of many of the enclosures and the buildings that house still other exhibits, but progress is both steady and obvious. A brand new elephant barn and vastly expanded outdoor yard are nearing completion as I write this. Zoo officials were hoping to debut the new digs by now, but concern for the safety and acclimatization of the pachyderms means the grand opening will be delayed.

The zoo administrators are endlessly creative in fundraising. One example is the “Round Up for Elephants” that allows patrons of the zoo restaurant and other concessions to round up their purchase price with the extra change going to finishing the new exhibit. The zoo thus makes it easy for you to make a difference. 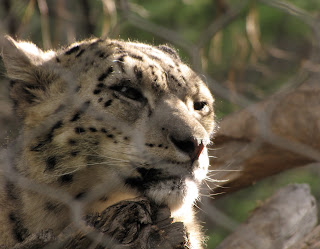 Yet another interesting facet of the Cheyenne Mountain Zoo is that some of the wildlife is not in cages. Native Golden-mantled Ground Squirrels have run of the place, when they can avoid becoming the prey of weasels. Deer make regular appearances on the grounds. Bears are problematic and unwanted guests that dumpster-dive after hours. Magpies scrounge for scraps from the captive animals. A Golden Eagle soared overhead just last week. Hummingbirds, as well as butterflies, bees, and other insects visit the many native flowers planted as part of the landscaping. I am working with two zookeepers to draft a list of all these species. Invertebrates included, it already tops 200 species. 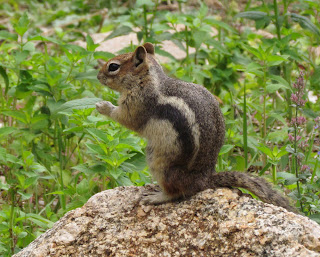 Zookeepers and curators are constantly striving to create new enrichment opportunities for their captive charges, inventing new ways to enhance the mental and physical health of creatures that normally range unfettered for miles in their native habitats. Their caring attention shows. The animals are in beautiful condition.

The zoo does not settle for the standard fair of keeper talks and summer camps, either. Many special events highlight the year, including this month’s “Boo at the Zoo,” and the ever-popular “Electric Safari,” celebrating its 20th anniversary this holiday season. 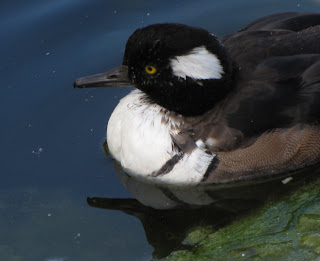 I am looking forward to learning more about the zoo, and maybe even helping to integrate more invertebrate wildlife into their collection. It is difficult to not want to be a part of something that brings so much joy to visitors, and helps insure the continued survival of endangered species.

For more information, please see the web site for the Cheyenne Mountain Zoo, as well as their blog, ”In Between the Spots.” Follow the zoo on Twitter and “like” it on Facebook. Most of all, do visit, become a member, or otherwise participate in more than the virtual zoo. You’ll be glad you did.
Posted by Bug Eric at 6:00 AM