Over the Christmas holiday I had the privilege of visiting the Squaw Creek National Wildlife Refuge on the afternoon of December 27, 2011. Not only did I get to go with my fiancée, Heidi Genter, but also Heidi’s mom, sister, and her sister’s five-year old daughter. At the refuge we met a mutual friend from Facebook, Shelly Cox, and her husband Joey. 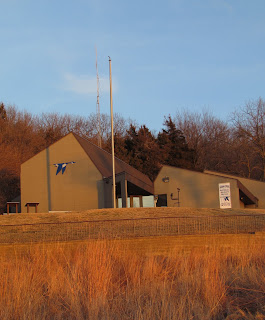 No sooner did we arrive at refuge headquarters than we spotted several Bald Eagles, both adults an immature, gliding overhead. It was a good omen. Shelly, who works for the Missouri Department of Conservation, makes regular trips to the refuge; and Heidi’s mother often brought her students their on field trips when she was a teacher at a Lutheran elementary school in nearby Leavenworth, Kansas. So, we were blessed to have people along who knew where to go to see wildlife. 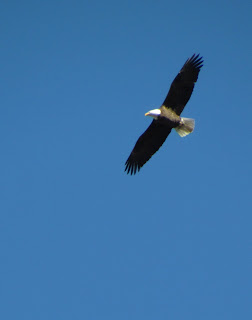 The interior of the headquarters building is full of great information, most of it free for the taking. Brochures, maps, coloring books for children, and even a frame-worthy print of an image of a Bald Eagle by photographer Jim Rathert, are among the items we took home with us. There are also gifts one can purchase. 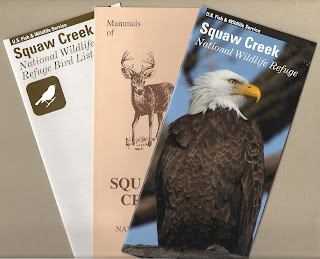 Beyond the front desk are interpretive exhibits that offer an introduction to the fauna of the refuge. Most specimens are taxidermy mounts, but some are alive. The day we visited there was a very healthy specimen of an Eastern Massasauga rattlesnake, Sistrurus catenatus, on display. This is an endangered reptile in the state of Missouri, and a candidate for federal listing as “threatened.” 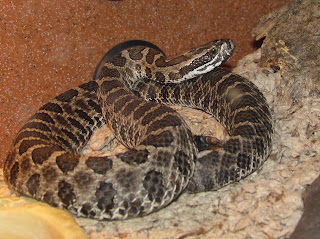 Leaving the headquarters, we proceeded to drive around the large bodies of water that make the refuge so inviting to migrating waterfowl, raptors, and other birds. You can hear the vast flocks of Snow Goose, Chen caerulescens, long before you see them, but the sight is truly spectacular. An eagle passing overhead sends them into a tizzy, flying up in great clouds of wings, and amping up their already loud honking. 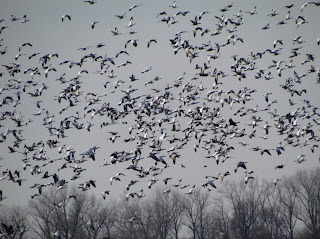 Besides geese (including Canada Goose, of course), Trumpeter Swans are another abundant species. Over 200 had been seen the week before our visit. We also saw several Red-tailed Hawks, and one solitary Rough-legged Hawk, Buteo lagopus (below). The refuge is also a paradise for Muskrat, Ondatra zibethicus. We saw several, but were told they were vastly more common prior to last year’s great flood of the Missouri River that pushed them up to the foot of the bluffs surrounding the floodplain. We also saw one Whitetail Deer, Odocoileus virginianus. 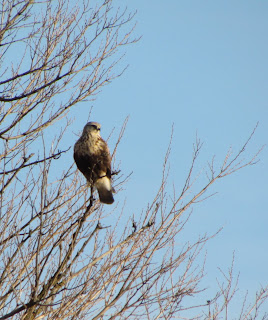 President Franklin D. Roosevelt established the Squaw Creek NWR in 1935, and the Civilian Conservation Corps built most of the dikes, roads, trails, and buildings while camping in nearby Mound City. The refuge is more than just wetlands (3,400 acres). There are also 2,100 acres of grassland, 1,560 acres of forests and woodlands, and 400 acres of crops. 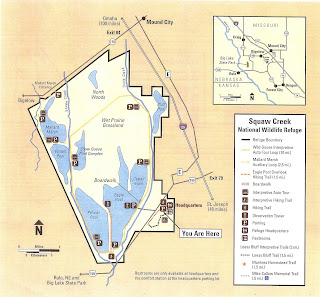 Driving along the berms there are places to pull off the road and look for birds. You can even build your own eagle eyrie at one stop. 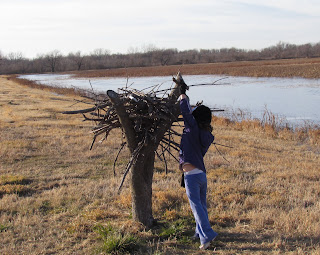 Late afternoon in late December may not be the best time to visit, but our trip did provide a spectacular sunset view over the open waters, and even a “Sun Dog” weather phenomenon. Fine ice crystals in cirrus clouds can create a short rainbow on either side of the sun (below). 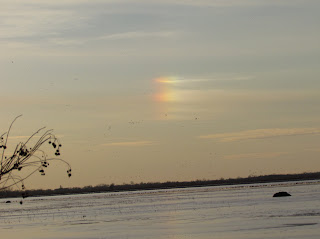 Special thanks again to Shelly Cox for being our tour guide. For more and better images of the birds and wildlife of Squaw Creek National Wildlife Refuge, please browse this Flickr.com group. You will get hooked for sure, and want to add this gem to your list of places to travel to.