My mind is an emotional train wreck right now. Depression has many faces, at least that is what I believe is true for me, and I can speak only for me. It is a condition that can be fleeting, or stubbornly entrenched for weeks or months; and it can be triggered by many stimuli. Lately, the monotonous and unseasonably cold, wet weather, is largely to blame. 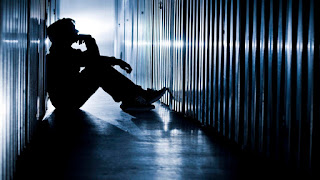 Feeling powerless to change circumstances is without a doubt one of the leading emotions that causes me to fall into despair. I truly can't change the weather. It is going to be bad until it is good again. I cannot change the marketplace. My chosen profession and its attendant skills and knowledge will continue to be devalued for as far into the future as I can see; but I also can't change who I am, which, at its core, is a writer. It is also difficult to accrue new skills and new circumstances when one does not have the financial capacity to attend classes, travel to better weather, or otherwise self-improve....because you can't earn enough at your profession.....a vicious cycle.

Frustration for me results in one of two things: sadness or anger. Usually it is the latter. Lately I have been more silent than usual because I fear nothing but a string of expletives would leave my mouth (or my fingers as they dart across the keyboard). I wish that it was more widely considered by the scientific community that violence and depression in men are strongly linked. Men have a much harder time expressing themselves verbally. Why do they smash the plate against the wall during an argument with their spouse or significant other? "There! Do you see that? That is my heart, shattered." Men want desperately to have a tangible expression of how they feel, and this often comes out violently.

One expression of depression for me is what I call the "snowball effect," whereby one negative thought leads to another and they keep accumulating until there is no stopping them and they almost bury you. During one of these episodes your life seems to stink more than it really does because the snowball is also a dredge that hauls up memories that are not necessarily still applicable to your current condition. The good thing is that I am getting better at recognizing this before the snowball builds enough momentum to be all-consuming. The bad lunch does not carry as much weight as I thought initially, and can be allowed to fall off the conglomerate of other matters.

I will assert that few people are able to cope with depression, tragedy, and other life challenges in a healthy manner. Such things usually trigger extremely bad coping "skills" such as addictions, flight (from relationships, reality, etc), suicide, and homicide. These days, another coping mechanism is "oversharing" on social media. This is understandable. Misery doesn't necessarily love company, as the old saying goes; but misery does crave understanding and empathy; and reassurance that most situations we face are only temporary. Facebook has become in many ways a 24-7 version of Oprah or The Phil Donahue Show, or Sally Jesse Raphael for those who can remember that far back (I even appeared on Phil Donahue's show in February of 1989 to talk about adult children of divorce).

Anyway, few of the ways we want to exorcise our demons are productive. I cannot go on a shooting spree when what I really want is to kill the marketplace, not its inhabitants; and the social fabric of our world already has enough holes in it anyway. We need more patches and some really good seamstresses. I can't kill myself because then I send someone else down the road I just exited. Drugs and alcohol only serve to make one more destitute financially, and more unhealthy physically.

Suggesting someone suffering from depression get "counseling" can seem helpful, but here timing is everything. So is type. Personally, I am so self-analytical as it is that seeing a psychoanalyst is redundant. Back in the day I eventually tried a twelve-step group for adult children of alcoholics. I was receptive enough to the idea in that particular window of my life to actually get a few things out of it. This is when I first realized my problem with "God" was actually rebellion against religion, a human social institution. I also finally started understanding how my "buttons" were getting pushed, and began rewiring the mental circuitry so that I could better articulate my own position instead of reacting inappropriately to the other person.

Both one-on-one therapy and peer therapy groups can be helpful if only because you are expressing yourself out loud and you tend to hear yourself better when you do that. Listening to the experiences (traumas, really) of others helps build empathy and creates a more holistic view of one's place in the spectrum of personal atrocities and joys. Ideally, it does this by creating a reverence for those who suffer, including one's self.

There is a reason that you never see the theatrical "tragedy" mask without the "comedy" smile right there next to it. I find that the one sure-fire antidote to depression is humor. I think I may start building a library of stand-up comedy DVDs to have at the ready for my next low spell. A good dose of humor might not cure me permanently at any given time, but it will get my head out of itself and probably get me started writing my own material or drawing a cartoon. Comedy is also an awesome substitute for those times when the weather, lack of transportation, or other obstacle prevents you from doing equally healthy things like getting outdoors in nature, or exercising. Maybe music has the same effect on you as comedy has on me. Personally, music can be profoundly sad to me, so I have to be careful in my choices of artists and albums.

I have no way of knowing who is reading this, and what their own struggles may be. I do hope that they gain a measure of hopefulness and a sense of brotherhood out of this essay. Meanwhile, I need to scatter my eggs among less weather-dependent, market-driven baskets and reclaim my identity as something more than what I do for an occupation. We're all much deeper than we know, and far more substantial than what society tells us we are. Don't fall for it. Laugh at it instead, and be the individual example of what you want humanity to be. You'll fail early and often, but don't we all.