I have concluded that I am completely unqualified to write about the fairer sex. Oops, I did it again. I probably just offended thousands of feminists with a phrase that was considered complimentary back in the day. The following is not meant to be humorous, or flippant, but a reflection of an honest struggle to achieve personal understanding of how to relate to the opposite gender in a positive way, both personally and as a society. 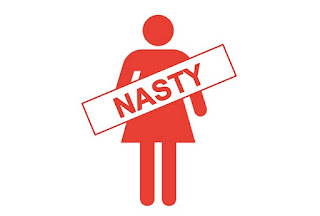 There are countless examples of sayings that should no longer be part of our societal conversation. "A woman's place is in the home." Utter that, and you deserve to be slapped upside the head. Every son knows that if someone calls him a "momma's boy," it is not intended as a compliment. Well, why not? What is wrong with having empathy, compassion, and at least some degree of sensitivity? We have very few words in our collective vocabulary that paint a positive picture of females, but suddenly, thanks to a certain high-profile political race, "nasty woman" is embraced as a badge of honor. Meanwhile, we throw around labels like b***h, diva, and whatnot every day. No wonder we are confused.

We call our entire species "mankind." We call God "Our Father." Jesus....Jesus was a man! The whole construct of human history, myth, and "progress" is overwhelmingly male-centered. Women have always been a footnote while men have left a footprint.

Back to day-to-day gender relations. Even chivalry may have ulterior motives. Are we being a gentleman when we hold open the door, or do we just want to watch your a** go through it? I suspect it is a little bit of both. I guarantee that I have offended entirely too many women throughout my life, knowingly or not. Today, I can no longer claim ignorance, cannot continue to make assumptions, or otherwise believe I know how to conduct myself in the presence of women. I may no longer attempt a hug without an unequivocal invitation to do so.

Now, women object to suggestions they should smile. There is open hostility from pent-up rage and resentment over Male Privilege. No one can blame them. They face daily the insidious if not outright blatant vulgarities of male dominance and expectation of subordination and male-defined femininity. The fact is, men have no clue as to what the average woman has gone through in her life, how many are victims of sexual assault, attempted assault, harassment, discrimination, and/or any other form of abuse. Guys, even your closest female friends are unlikely to let on if they have faced these crimes. They are also not likely to tell you if you are behaving inappropriately.

I carry guilt for myself, and for men in general. I am ruled by hormones to this day, I admit it; but that is no excuse for bad behavior, let alone criminal behavior. I hope that I am not a jerk, but I am lustful, no question. It is not a quality I am particularly proud of, but it is a facet of my being I have come to accept.

What was once considered polite and courteous is now considered condescending and patronizing. Men no longer have a language for women that is acceptable to women, and frankly I am not sure how that can be resolved. Tension between the sexes is at an all-time high. Part of the reason for this is the rise of women into positions of social, political, and economic power. It is about time that happened, but it makes the Good Old Boys network nervous. These men then regress into childish, but still hostile, language and behavior in a desperate attempt to return current situations to more familiar but oppressive norms.

Furthermore, masculinity, in America at least, is built largely on your history of sexual conquests and your "success" in manipulating women to suit your needs and desires. There are no rules, just goals, if you can call getting laid a goal. Losing one's virginity is the standard rite of passage for teenage boys seeking manhood, along with getting your first car. What the hell?

So, here we are in a "swipe right" society, pretending we still care about dignity and respect. Alas we are shallow. It is the sad luxury of too large a population where there are always more fish in the sea, and our relationships on the whole are superficial. When all is said and done, though, one old saying still rings true: "Women: can't live without 'em."