State of the Union Divide 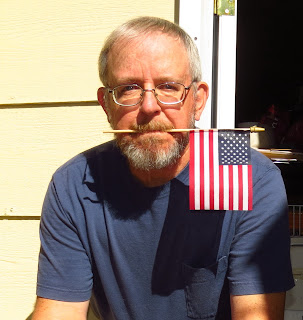 My new masquerade in the interest of personal safety: As White and Patriotic as possible

Never have I felt such a sense of being misplaced as I do right now in the wake of this U.S. election cycle. I was less anxious after September 11, 2001. The title of this post is misleading, too. We are not a country divided, we are a nation that is shattered. Placing the entire federal government leadership in the hands of a single party sets up the potential for unimaginable tragedy.

The working class, the poor, minorities, immigrants ("illegal" or documented), the LGBTQ community, women, children, and many other conveniently-lumped groups of human beings have legitimate, profound complaints with current leadership. About the only group without an axe to grind are those with White Male Privilege, yet we elected about the most privileged White (well, orange, close enough) male possible to the highest office in the land. Yes, the Democratic National Committee (DNC) rammed Hillary Clinton down our throats when it was glaringly apparent that Bernie Sanders was a cut above, able to address fully the wealth inequality that is at the core of the angst of the electorate; and without any attendant scandal. Still.

Part of the problem is that our electorate is so fragmented that their votes are based on a single issue. Blacks want a leader who will keep them alive, then, hopefully, give them more opportunity for advancement in society. Republicans are not going to reduce mass incarcerations, let alone pledge a moratorium on fatal shootings by police.

Meanwhile, immigrants from everywhere, not just south of the border, want equal opportunity. We need to work on overcoming language barriers, but they are not "taking our jobs" as many would have us believe. Frankly, nobody should be doing dangerous work like that of migrant workers for a sub-minimum wage, without proper healthcare, nutritious food, and secure lodging. "Cheap labor" is an insult that encourages poor performance, a litigious society (lawsuits are viewed as getting what the plaintiff feels is owed to them already), and a screw-you attitude toward our nation as a whole. After all, look who literally prospers from the fruits of their labor.

Women did not vote in overwhelming numbers for Clinton. I suspect many wanted the symbolism of a female leader, but were uncomfortable associating themselves (or their votes) with someone of dubious repute. Did she earn her way to the top by sticking to her values and principles, or did she compromise time and time again to survive and advance? Why they saw Trump as a viable alternative is beyond me.

Perhaps the most worrisome aspect of the campaign leading up to the election was, well, the campaign. The media failed completely in holding discussion to issues of core importance. Trump was, is, and always will be, an entertainer first, a businessman second, and everything else a distant third. He was allowed to take his act, unrestrained, to every debate, town hall, and public appearance. Don Rickles could not have done it better. The insults. The distractions. The vulgar humor.

The act of running the country, however, is not a celebrity roast, or even a reality television show. It takes diplomacy, of which Trump has demonstrated zero aptitude. It takes tolerance, to which Trump has turned a deaf ear. It takes humility, for which Trump scores in negative numbers.

Trump appealed because he gave us the promise that all we had to do was elect him and all our problems would magically disappear, like he is the Great Houdini or something. Again, the showman emerges, with no substance behind it. Are we so lazy that we will freely admit we want someone else to do the work, even if that "work" in the short term undermines long range opportunities for prosperity for ourselves, our children, and others?

Despite the results, I would still like to believe the majority of U.S. citizens want our nation to be an example of charity and good will, both at home and abroad. We believe in rewarding good work, holding ourselves and each other accountable for our actions or lack thereof, and actively punishing wrongdoing.

What I fear is that a sizeable minority will take this political moment as a sign that they have permission to exercise their White Male Privilege even more destructively than is currently the case. Trump rallies have been a horror show in this regard, and I am not looking forward to inauguration day. There may be civil unrest for months, but the good news is there will no longer be complacency from any party dedicated to civil rights. We have clearly been living under a false sense of security.

Left to political devices and political "will" and whims alone, we are never going to rise to our true potential as a nation. We don't have all the answers, either, and until we embrace the successes and innovations of other countries as well as those here at home, we will flounder; and enjoy a global reputation as a population of gluttonous egomaniacs. Sound familiar? I'm Eric Eaton, and I approved this message.