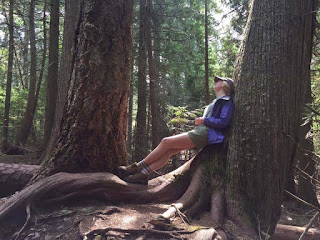 This week I fortuitously intersected a Facebook post by Jessa Thurman, a graduate student in entomology at a university in the Pacific Northwest, and invited her to allow me to post it on this blog. Vegetarianism is socially awkward for many non-vegetarians, and this may be the best explanation I have come across yet, eloquently written and free of the contempt too many folks have for anyone with a different diet than they themselves have. I thank Jessa for letting me share this, and I hope she keeps writing.

Around 7 years ago, I stopped eating mammalian meat. At the time it wasn’t a decision made for any other reason outside of how it was making me sick. After eating beef or pork, I would feel sick to my stomach, as though the meat had become stone, and would often have to sleep for 5 to 7 hours after the pain began or just revisit what I ate. It was easy to pick out the other foods that followed this trend: mammals or ‘red meat.’ What was even simpler was the decision and action to stop eating these kinds of meat. Meat was more expensive and there were plenty of cheaper, healthier alternatives. Chicken or fish worked as one substitute if I ever needed one, and I didn’t have to give up my favorite meals. Soon I felt much better and even lost a bit of weight. I continued the diet to avoid other mammals whenever I encountered them like lamb, deer, and kangaroo, even though the last one had peaked my interest. And I followed through with this choice because it just wasn't worth how bad it made me feel.

Simply saying I was allergic to the meat or couldn’t eat it immediately calmed those who challenged my dietary choice and at the time I didn’t think much of those challenges. Once I started college and began my studies in biology however, I started considering human impact on the Earth. The majority of our agricultural land is devoted to growing livestock feed with the main feed ingredient, corn being grown on 90 million acres of land (USDA - U.S. Department of Agriculture) and according to the FAO [Food and Agriculture Organization of the United Nations], livestock grazing occupies 26% of Earth’s ice-free land. This translates into most habitat destruction for agriculture being driven by our high demands for meat. On top of the habitat destruction, livestock are also responsible for about 7% of total greenhouse gas emissions which contribute to global climate change (FAO). The increased frequency of dramatic climatic events like drought which has led to the recent intensity of forest fires tearing across the US or Hurricane Harvey which is currently causing floods in Texas, are all linked to global climate change. In light of these major issues, not to mention animal cruelty, my once simple decision became more philosophical. It was a small change I could make to decrease my Carbon footprint - a personal decision.

My life choice to not consume beef or pork became more of an environmental choice and I adapted it to include buying more of my groceries from local farmers and limiting my other meat consumption. All of these changes, for me, were very easy to make. The recurring problem was instead having to explain and often defend my choice to others who eat a lot of meat. Their challenges, I understand now were made more so out of defense for their meat-eating rather than malice, but I think it should be repeated that I and many other people who have made dietary or life changes, make these choices for ourselves [italics mine]. I've witnessed more intense challenges for vegetarians and vegans for their dietary changes, but why do they seem to threaten your way of life? People who make these life choices 1) are not suffering for it and 2) are not harshly judging all meat eaters. Everyone's life is different and sustainability is a goal we continuously work towards rather than a line we cross.

It’s been a long time since I made this original change and I have debated posting about it in the past because from the same critics, I feel like they perceive this dietary choice I've made is a status I want to flaunt. Instead I just want to share how and what I am doing to lessen my Carbon footprint, and this particular change is one that came easy for me. I know I am imperfect in many other ways, but I'm working on that. I assume everyone is and want it to be known that I and others like me, be they vegetarians, environmentalists or others, generally aren't 'Nazis' for the planet who glare and gossip about how you are enjoying that burger right now. So next time, please don't roll your eyes at our dietary choice or challenge our philosophical basis for making it. It's our life and we're all making different changes.

I could stand to take several lessons from this: Be less judgmental period. Eat even less red meat than I do now, and strive to eat less meat of any kind. Read more things from Jessa Thurman.