An Hourglass of Inheritance and Insanity 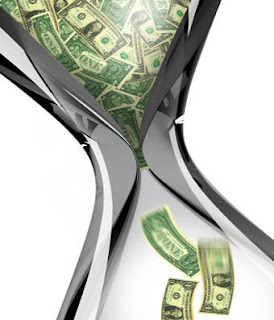 John Lennon forgot to "Imagine" one crucial scenario in his classic song of that title. "Imagine there's no money" would be the lyric I would add. That unnatural resource of currency is perhaps the one thing that rules all of our so-called civilized behavior as a species. That and sex, of course. I know that my life would be a lot less complicated if money were not an issue, and recently it became an even more stressful complication in the care of my aging father.

The facility where my father currently resides has petitioned the court to appoint a "guardian ad litem" to take over all of my father's decision-making capabilities. A guardian ad litem is most often appointed in cases of child custody disputes, abuse, or neglect, the guardian being a supposedly unbiased party advocating solely for the child or other person who is incapable of fully defending themselves. I learned of this when I received a copy of the papers in the mail from the petitioner's attorney. No phone call, no interaction, just straight to a judge.

Furthermore, statements in the documents assert things that I never said, judgments I never made, and describe all of this in language that I could interpret as libelous, defamatory, and slanderous. If the retirement home my father is residing in treats next-of-kin like this, no wonder he is unhappy.

This legal action probably stems from an incident in which my father became combative, and could be construed as endangering himself as well as the welfare of others in the building. My father is a chronic alcoholic. He drinks when he is depressed, bored, and otherwise unhappy; and he either has not availed himself of recreational programs at the facility, or there are none that he is interested in, or both. He repeatedly expresses his desire to be done with life. He never fully recovered from the passing of his second wife (my stepmother) several years ago. While his emotional state continues to deteriorate, his cognitive abilities remain intact, which is why this legal action is all the more revolting.

Meanwhile, I am not in a personal financial position to take any action myself. In fact, I have no potential income on my immediate horizon. My major client employs me mostly from late spring through early fall. Yes, I do have some hesitation to visit my father for the same reasons the retirement home finds him to be a handful. He is hard of hearing, and prone to temperamental outbursts. Still, the overriding reason I do not visit is because I cannot afford the airfare. I am an only child, so I also do not have sibling help. My cousin, who does live closer, has understandably reached wit's end, and he also has his own family, and a business, to look out for.

I received the court documents late on a Friday, naturally, so contacted the attorney for my father's estate via e-mail the following Monday. The attorney is the kind of guy that makes you think twice about telling a lawyer joke. He is kind, understanding, thoughtful, and expensive. Retaining him in this matter would bankrupt me in a matter of days. I told him as much, politely. His response was that his firm's fees would come from my father's estate since this issue pertains directly to his estate.

Here is the thing. I am somewhat embarrassed to admit that I was rather looking forward to a bit of inheritance from my father, to ease my own financial burdens in the future. I have concluded that I will be damn lucky if the whole thing doesn't get burned up in efforts to protect that inheritance. Forget the "death tax," attorney fees and other expenses will take a greater, ongoing toll. Heck, the retirement home appears to want to get as much as they can out of him right now.

Everybody wants their cut. The yacht club got a sizeable chunk out of him to build a new bar. How appropriate. Given that the yacht club has been one of the communities my father truly has felt comfortable in, I don't object to his donation, honest. Still, the sands of money and time in the hourglass steadily slip away.

It is all I can do some days, probably like my father, to just get through, accomplish something of worth, and steel myself for the next day. My father and I are a lot alike, it occurs to me, in our isolation, our internal demons, our addictions, and our struggle not to have a bleak outlook on the future, both personally and for the world at large. At least I have my words, and expressing my mounting frustrations, dwindling hopes, and raw emotions does help. One of those hopes? That this kind of thing is never visited on you.