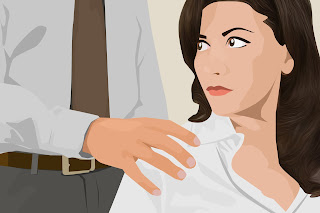 No, I am not a woman who has been sexually harassed in any way, shape or form. I am, instead, a man who is guilty of inappropriate behavior, in my past, if even unwittingly. The standard of what constitutes sexual harassment has changed considerably over the last few decades, and that is a good thing in the sense that no one should have to tolerate even the lowest, most passive forms of abuse.

For the record, I am making a sincere public apology to any and every woman I have offended, whether I realized it or not at the time. I am totally ok with assuming whatever degree of guilt I deserve for the unwanted touch, the "compliment" on a woman's external beauty, or any other gesture or language that was or is unacceptable to the recipient. I am better at taking shame and using it to better myself these days than I would have been at a younger age. I am eternally grateful to the women who have asserted themselves and told me in no uncertain terms that my conduct was intolerable, even if a single incident.

Each woman has her own personal threshold for what she is willing to accept or, more likely, overlook when it comes to misconduct by males. Men have to understand that and make the assumption that almost anything said or done in the arena of sexuality (even the outskirts of sexuality, to include beauty and attire to name two) could be interpreted negatively by any woman. Men should not express physical intimacy unless unequivocally invited to do so.

I vividly recall having expressed a desire for affection from a woman, being politely but firmly rejected, and learning from her the next day that she had a stalker. The fact she did not throw me out of her home the night before speaks volumes about her strength, tolerance, and trust. Naturally, I apologized profusely, but, to this day, not enough for my own conscience. We remain friends and I will always hold her in high esteem. The point is, I assumed incorrectly that she had not experienced the trauma of harassment. It amazes me that women still trust men at all in the face of our misogynistic society.

Last Sunday my Facebook newsfeed was full of "me, too" posts from nearly all of my female friends who have experienced the indignity and shame and guilt and horror of sexual harassment in one form or another. I remain appalled by that, but sadly not surprised. As one woman pointed out, this does not even include women who never told their parents, spouses, or authorities about the harassment they experienced, so are not about to disclose it on social media. Understood.

I would hope the tide is turning, but we cannot rely on men in power to address this epidemic in any meaningful way. Even leaders of this country have either confessed to sexual harassment or been implicated for it. Many powerful men feel entitled to conduct themselves in any manner they see fit, whether they create victims or not as a result. If your code of conduct is ruled only by whether or not you have done something you could be prosecuted for, then you are missing the point. This is an insidious plague that casts a constant chill over women.

The solution is going to be the average man taking an above-average stand, every day, when they witness sexual harassment. It means conducting oneself with a degree of self-censorship in word and deed that we have not paid enough mind to until now. I have pretty much vowed not to hug anyone I do not know, unless obviously invited to do so. I will be more careful with what I once considered "compliments," that were in reality thinly-disguised attempts to initiate sexual intimacy.

Today, I am married, and am a better man for that institution. Having a spouse makes you more keenly aware of what is (or should be) acceptable behavior and what is not. We, as men, need to unlearn behaviors we learned from our fathers, uncles, and other male role models in our youthful lives. We then need to take the new standards of positive behavior to our sons and other boys in our community. We must earn respect, and teach boys they must also earn it. Right now, every woman on the planet has the right to assume the worst about us. I don't want to be the one implied in "me, too." Do you?