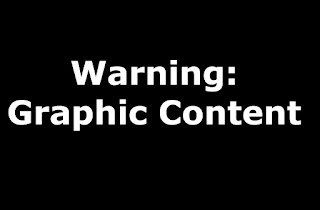 Movies and television have long given advanced warning of graphic content before showing or broadcasting to audiences. Social media, and the internet in general, are lagging a bit and so less savvy users are occasionally startled by content they were not expecting and that they would deem inappropriate for themselves or younger members of their family. Personally, I count images and videos depicting graphic violence between animals as something I would like to be warned about rather than suddenly confronted with in social media. It does not stop there, though, and people who voice their discomfort are often shamed by others for not being "man enough" to take it. That needs to end.

We could probably debate the true meaning of the song "King of Pain," by The Police from their Synchronicity album, but what I take away from it is that the singer feels intensely the suffering of every other living creature. It is inescapable, much as he longs for relief. I can empathize with that. Indeed, empathy is the whole point of this blog post. My brain, for whatever reason, is acutely sensitive to graphic violence and gore. I sometimes find myself involuntarily recalling horrible images or movie scenes without prompting, just suddenly, randomly, and for no apparent reason. Meanwhile, I have much more difficulty conjuring peaceful, pleasant images. Maybe you are wired differently. I hope you are wired differently. It is not any fun to be a King of Pain.

Professional wildlife photographers should be committed to documenting life with honesty, and predation, territorial battles, and other violent conflicts are a part of life, no question. It is difficult for me to communicate my understanding of that to my camera-toting colleagues while at the same time arguing against what amounts to nature violence pornography. It may come down to intent. Sex sells. If it bleeds it leads. You know the drill. Networks and their executives who pander to a perceived public bloodlust are also failing to be honest, let alone fair and balanced. They may need more diverse focus groups, or simply stop making assumptions, or otherwise take responsibility for their content instead of claiming that a steady diet of violence is what audiences want. This includes Discovery Channel and Nat Geo.

Online, I have finally noticed that the more responsible outlets for natural history content, and/or my friends, are prefacing videos at least with text warnings if the content is of a violent or graphic nature. I appreciate having the choice to click or not. When someone shares a graphic video or image then I will comment that I do not like to see that kind of thing without warning, thank you. Sometimes, if their reply is impolite, I unfollow them.

I have been told that if I don't want to be exposed to certain things then I should get off the internet. I have been told to "man up," implying that if I find certain things distasteful then I am somehow being a baby or too sensitive or some other judgmental epithet. No, I am not a child or some other kind of innocent, but I am vulnerable. Some people are not comfortable with being vulnerable, but we don't shame them for having a hardened heart. I would not advocate that we should. There is no place for shaming anybody except, perhaps, those who perpetrate cruelty, shame, discrimination, and other acts of wanton, needless hostility.

This is another kind of divide in our country, one of conflicting personality traits. It is not necessary that we all think alike, or "feel" alike, either. We need diversity in all aspects of our life: biologically, psychologically, and socially. What we must have in order for that diversity to flourish is respect and acceptance. You want to watch animals killing each other? Fine, but do not admonish me for not desiring the same thing, or objecting to it when you gave me no choice but to see it. Understand the difference between someone standing up for themselves, and someone berating you for whatever excites you.