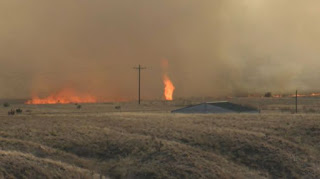 Having military bases as neighbors is not without its irritations, but last week civilians were forced to evacuate when the Carson Midway Fire swept through their neighborhoods after "going off the reservation" as it were. While I support our troops, the men and women on the ground at home and abroad, I do not always endorse the missions they are sent on, nor the leadership calling the shots. It is my opinion that the Army base of Fort Carson clearly compromised public safety by insisting on using live ammunition for training exercises during red flag warning days of high winds, exacerbated by severe drought. Surely, solutions exist.

The Carson Midway Fire actually represents the fusion of two separate fires. The merger resulted in the burning of 3,300 acres, reaching the El Paso-Pueblo County line, west of Interstate 25 near the Pikes Peak International Speedway. It was that portion of the fire that consumed several structures, including two homes, and resulted in at least 250 evacuations. It also ignited an enormous pile of discarded tires. Those tires are still burning as I write this, and evacuees from the immediate vicinity are not being permitted to return due to the dense smoke and toxic fumes emanating from the burning heap of rubber. According to one spokesperson, there are heavy metals in tires that, when there is "incomplete combustion," liberate toxic chemicals, especially cyanide. Terrific.

Fires in rural areas here also affect livestock, so accommodations have to be provided for evacuated horses, cattle, and other large animals, plus smaller pets. Colonel Fitch may have empathy for evacuees and those who lost their homes or other structures, and remorse or regret for how things went south, but if so it was not on display at the press conference on March 16. Instead, he asserted matter-of-factly that imminent deployments of personnel to Afghanistan and elsewhere necessitated employing live rounds during training. Meanwhile, the El Paso County Sheriff's office is the agency left holding the bag.

This is a fast-moving story, and now the Environmental Protection Agency (EPA) has taken over the extinguishing the tire fire and subsequent clean-up of the underlying soil contaminants resulting from the fire. Evacuees might be allowed to return today (Thursday, March 22), but no final call has been made.

It remains unclear among the myriad of agencies involved as to which ones will be deemed responsible for compensating for damages, or providing relief in other ways. The Red Cross did set up an evacuation center in Fountain, Colorado, and as usual the state fairgrounds in Pueblo offered shelter for livestock. Two other centers were established to receive smaller animals. What happens next?

An online petition is now circulating calling for the prohibition of live fire rounds on the Fort Carson base during red flag days of high or extreme fire danger. The petition has already secured over 2,000 signatures. The purpose of this petition should not be read as a desire to hamstring our military operations, but instead to insure the safety of both military and civilian personnel, and to limit the impact on precious fire-fighting resources that can be stretched thin given the outbreak of fires off the base.

No matter the jurisdiction, when it comes to fire prevention, everyone should be playing by the same rules. This is simply common sense, and would unite our diverse community instead of dividing it. The Front Range is a unique and complicated amalgamation of urban, rural, military, and wilderness landscapes. Establishing guidelines that respect those diverse interests, public or private, is not without its challenges, as we are learning from this unfortunate event. We need to come to the table and make some tough decisions before the fire next time.