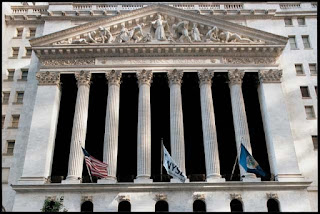 No. I could leave it at that one-word answer, but then this would be a very short commentary. While it is about time that the New York Stock Exchange had a woman at the helm, she would not be there if she promised anything but business as usual.

Judging by the reactions of other women in leadership positions, this historical appointment (the NYSE is 226 years old and Cunningham is the first female president) is barely significant in achieving the goal of gender parity in the financial services industry, let alone any other kind of milestone. As Kathryn Kolbert of the Athena Center for Leadership Studies was quick to point out, the fact that we are still celebrating every newly-minted woman CEO shows how rare this phenomenon remains. According to Kolbert, you need to reach at least a thirty-percent threshold for critical mass, when the good 'ol boys business model begins to transform and truly accept gender equity in terms of leadership roles.

The NYSE may in fact be eager simply to change public perception of itself as a stodgy institution of greedy White men with little concern for the average American citizen who is increasingly "minority" in every sense of the word. Well, good luck with that. We are not so easily fooled into believing that a fresh face, female or otherwise, is anything more than a facade for what some would call the most destructive entity in our economic sphere.

Public enterprises on the NYSE, Dow, and other registers have succeeded largely by exploiting labor, eroding consumer protections, and lobbying for deregulation to absolve themselves of harm to the environment. Did I mention they have also cannibalized each other in mergers that are permitted by lax anti-trust laws? No? Well, they do. Wall Street should add a dog to the bull and the bear because it is a dog-eat-dog world they have created. The only survivors, the only constants, are shareholders. Shareholders are people wealthy enough to invest in public companies. The fast majority of us, if we called a financial advisor, would be laughed at and then hung up on. We don't matter. Never have, probably never will.

Changing that callous culture is what we all want from the next appointed leader, regardless of what gender they identify as. One would like to be optimistic in this case, but feminism has created something of a monster. Young women have been taught that if you want to succeed in a man's world, then you must behave like a man. You must set aside your sentimentality, your desire for compromise and cooperation, and be ruthless to be accomplished in the business world. No room for warm hearts here. What a shame. What a failed promise of feminism to heal the wounds of economic warfare, to make businesses more humane. Indeed, to make society more accountable and trustworthy.

Do not get me wrong. I have not met Ms. Cunningham, and have no personal axe to grind. She may be a truly gentle human being. I will even assume so. It is just that I fail to see why anyone of either sex would want anything to do with an institution so hell bent on concentrating wealth into fewer and fewer hands. Wall Street is symbolic of greed because it enables a financial model that creates and rewards greed. This is what has to change, and anyone who advocated for a system that was more fair would not be granted a leadership position. They would be sent packing.

It may simply be the scale of Wall Street that has become the greatest part of the problem. A similar model scaled down to the size of a local economy, with vastly lowered investment thresholds, might work just fine. The more shareholders the better. The less exclusiveness, the better. The more diversity, the better.

Cunningham is likely to be the continuation of the problem here, not because she could not change Wall Street for the better, but because her affluent constituents have no will to do so. They are being served already. Well, let them all be served with this notice: the revolution is coming. You will know by our lack of participation in your transactions as we turn to local commerce, and invest not in products and services but in experiences, charitable organizations, and assign more value to intangibles.