I write this as my father lays dying several states away. The hospice care workers tell us that they would be surprised if he lasts until the end of the week. You do not need to know how he got here. You do need to know how I got here, to the point of wishing no suffering on my parent, but not wishing to see him, either.

My father is over ninety-two years old. How he has survived to this point is a mystery, given his alcoholism and Type A personality. Maybe just an angry personality. He was never satisfied with his life throughout his marriage to my mother. After the death of his second wife, his life began to deteriorate. He is not able to function well on his own. That is one trait for which I still take after him, much to my dismay. 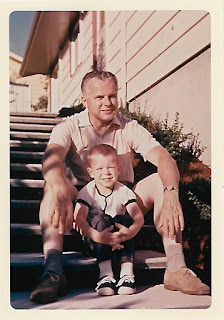 The things I learned from my father I have had to steadily unlearn. Anger used to be my ruling emotion, too. He demonstrated that rage is how you get your way, how you assert yourself, how you express your pain, but it really just makes people hate and fear you. Dad never learned about empowerment, just power. I would cower as a child during one of his outbursts. Rarely were they directed at me, but threatening my mother has the same effect. Doing damage to property creates an atmosphere of constant anxiety, if only because every day you see the hole in the closet door, the hole in the screen door, or some broken object. He drank, too, of course, and so when I became of age and struck out on my own, that is how I began coping with emotional pain and insecurity, despite the fact I have never really enjoyed alcohol.

Here we are, miles apart, and I am told that I should hurry to see him. Why? I have spent the majority of my life doing what other people have told me I should do, and resenting them for their "advice." No more. They do not deserve my animosity, for they have a right to their sentiments. I have a right to make decisions on my own, though, and I have concluded that it is in my best interest to await his passing from a distance. I could justify a case for either course of action. I could claim that I would rather not remember him on his deathbed, barely conscious let alone coherent, perhaps not even recognizing me. On the other hand I could secretly enjoy seeing him in a position of utter physical helplessness, his power over me vanquished at last.

The last time I spoke with my father was over the telephone, many months ago now. He had made a habit of calling me to tell me goodbye, that he was happy with the life he led and was now ready to surrender. This particular conversation took a different turn when he once again started making derogatory remarks about my mother. I do not hold either of my parents in high esteem, but my mother made untold sacrifices to get me to adulthood, and despite her shortcomings as a parent, I deeply respect her ability to succeed at that with limited resources as a single mother. I told my father that he needed to stop his defamatory tirade. Twice, at least. Because of his near deafness, he could not understand what I was asking. Ultimately, I hung up on him.

How does one honor their parents when they never honored each other? Thankfully, I am learning what real family life is all about through visits with my in-laws. My wife's parents are the polar opposite of my own. Sure, they have their moments, sigh and raise their voices in exasperation when they have to repeat something because the other one can't hear. They overcome their physical limitations through determination and sheer discipline, adhering to exercise regimens that would tax most teenagers. My mother-in-law swims daily, and gets in something like 100 miles each year. I would have drowned before a quarter of one mile. My father-in-law walks seven miles a morning. Pretty sure. All of this is because they recognize they need to do it for each other, their kids, their grandchildren. They share a devotion to God through religion, but never admonish me for not being so devout myself. This is in spite of the fact that their other sons-in-law are both pastors.

I honestly look forward to being myself full-time in the judgment-free zone. That is what my father's death will be: liberation for him from his failing body and mind, liberation for me from my parents' expectations and as a source of disagreement over my future. I will make no apologies for my reality. You did not live it, and I have no siblings to bear witness. Likewise, I have no control over your relationship to me, or to anyone else.

Free yourself from bad relationships, bad habits, and rewire your mind, through whatever channels help you. That would be my advice to others. But really, who am I to talk. I am still a work in progress, but it is finally my own mind and soul in charge.