Today is World Population Day. What does that mean to you? What is the intention of this observance; and is it possible to reflect dispassionately but critically on what it means to have so many human beings on planet Earth? 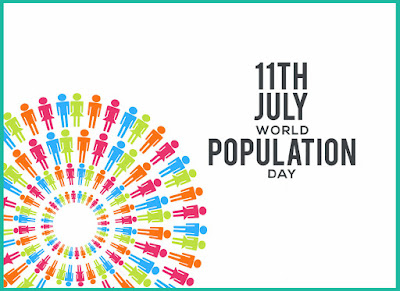 It turns out that the United Nations established World Population Day in 1989, two years after the estimated landmark human population of seven billion was reached. I dare say it has remained well under the radar of the average U.S. citizen, in part because so much polarization surrounds anything to do with issues affecting population. Were it not for CBS Sunday Morning last Sunday, I would not have known this day existed, let alone that it was occurring this week.

The current UN Secretary General summarizes this year's key points in this statement: "The 2030 Agenda for Sustainable Development is the world’s blueprint for a better future for all on a healthy planet. On World Population Day, we recognize that this mission is closely interrelated with demographic trends including population growth, ageing, migration and urbanization." Ok, first I have heard about the 2030 Agenda, too.

When many Americans hear the term "population," they internally add the word "control." Visions of a dystopian society in which the government dictates who can and cannot have children immediately clouds our vision. We even have previous historical examples, the latest being China's experiment with human reproductive....directives, shall we say. Perhaps no freedom is as valued in the U.S. as the freedom to have a family. We have fertility clinics for those facing physical impediments to reproduction. Our entire capitalist economy is based on the assumption that you will bear children that will consume goods and services throughout their lives. Certain religions place procreation at the center of their belief systems, too often with various warped results ensuing. Infringing on reproductive freedoms, or even suggesting that continued population growth is not necessarily a good thing, is met with instant and severe hostility.

Young American women face extreme social pressure to have children, this onslaught coming mostly from other women. It is a very real phenomenon that, like population, is seldom discussed. Meanwhile, economists, business leaders, and politicians whine about a labor shortage should birthrates continue to fall in the Western World. These same men fail to acknowledge that they readily outsource labor as it is, automate jobs where they can, and often refuse to grant paid maternity leave, pay a living wage, or offer health insurance.

We may struggle with these social issues, but other nations suffer poverty, in part because their populations may exceed the carrying capacity of their geographic boundaries, but also due to civil war, diseases afflicting their citizens, and myriad other factors. As much as the "developed world" lives in denial of its overly-consumptive per-capita lifestyle, it runs away at warp speed from suggesting that population is some other country's problem. Consequently, nobody talks about it, let alone takes action.

It is high time we make human population a regular topic of conversation, debate, whatever you want to call the dialogue. We must begin by having mutual respect for each other's personal decisions as far as child-bearing is concerned. Then we can go on to find agreeable standards for collective conduct and personal responsibility. It goes back to trust, that most fragile of human attributes, so endangered in our fearful society today. We have to trust the judgment of others as to what courses of action are appropriate for them given circumstances of physical and mental health, finances, spiritual subscriptions, and other factors which may be peculiar to that individual alone.

The old saying that it "takes a village to raise a child" has truth behind it, despite the cliché we consider that statement to be. The village is a global one, now. The world is watching. The universe is asking you to be kind, loving, and gentle to your fellow man. We are capable of making this work, but it takes work.