Of Science and Reverance

Last night I stumbled upon the documentary Inventing Tomorrow, directed by Laura Nix, on our local PBS (Public Broadcasting System) here in Colorado Springs. One of the things that struck me about these young women and men was how much they are motivated by reverence for nature and human history. I found the cultures these students live in to be a welcome, but stark, contrast to the culture and society American children are raised in. Science has informed their emotional attachment to nature, amplified their ability to empathize, and offered them real hope for a brighter future, one they can create. 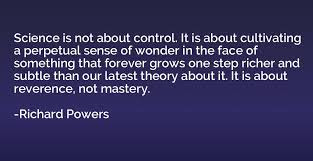 Here in the U.S., children barely connect with their elders, let alone respect them. In many other cultures, several generations reside under one roof, or live next door, or no more than a few blocks away, the better to teach their children and grandchildren well. Personal stories are a powerful source of inspiration and action when told to children. Do we relate our own experiences to our children these days, or do we fear embarrassment, or risk empowering our youth to try daring things like peace marches, or poetry? Do we invite our children to sacrifice instead of feeling entitled to material things? Most children who excel have families that go above and beyond mere support. Fathers and mothers may leave jobs or drive their child for hours to participate in activities or meet with a mentor. Sometimes entire families uproot to be in a location that is optimal for the next step in the child's path to greatness.

While the family is usually at the core of a child's developing sense of values, the community, the "village," is also important. Surrounding a child with influential people outside the familial circle further expands the child's realm of experience and knowledge. This happens routinely in non-American cultures, and it once happened here in the U.S., too, but today we are told that every adult is a stranger, a potential pedophile, rapist, scam artist, or other devious criminal. We assume the worst now, and trust no one. We fear that sending the gifted child to university prematurely will forever stunt their growth in the social sense.....

Religion should be working in concert with science to develop young minds. Science can show what is possible. Religion, ideally, creates the bedrock of reverence for creation and cautions against a completely dispassionate approach to research, especially in the biological sciences. That is not what is happening in American Christianity. Extreme conservatism has put itself at direct odds with scientific advancement, even questioning practices like immunization inoculations that have protected humanity from illness and disease for decades (centuries in some cases).

One could argue that the religious practices of indigenous peoples reflect a much greater reverence for the natural world, but Christianity has dismissed such belief systems as "paganism," seeking to convert other cultures at every possible opportunity. Missionary programs offer poverty relief, but with the strings of Jesus attached. Meanwhile, Christianity pays lip service to a reverence for creation, even when it could claim that Noah was the first wildlife conservationist. Prayer is the only action needed to save the world, while you continue your over-consumptive lifestyle.

I have personally exposed myself to both science and religion, and found that science creates a greater reverence for the natural world. It does at times demand a detachment from your (research) subject that I find distasteful, sometimes outright wrong, but it is generally a far less judgmental community, and getting better by the day. It does not retreat into outdated doctrines that have proved toxic to scientific progress, impeded the advancement of women, and suppressed minorities. It is embracing the entire spectrum of gender identity, and continues to welcome immigrants who bring new insights, skills, strategies, and vision in meeting the challenges of the future.

In short, science is what religion should be. Go ahead and pray, it cannot hurt, but please stop wasting energy attacking science. The two should complement each other, not antagonize one another. Practice restraint in your lifestyle, be conservative in your carbon footprint, and joyful in your celebration of all things wild and free. Feed your curiosity, fascination, and sense of wonder. Support your local science fair, as well as the vacation Bible school bake sale.