The Impeachment and the Super Bowl

The past few days have brought us events that offer a stark contrast between spontaneous generosity and orchestrated greed. We can learn from both, and demand better from ourselves. 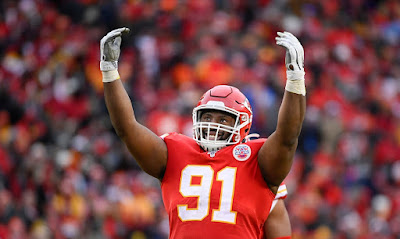 In the wake of winning Super Bowl LIV (54), Kansas City Chiefs defensive tackle Derrick Nnadi announced that he was paying the adoption fees for ninety-one dogs at the Kansas City Pet Project animal shelter. This is old news, it turns out. He has been doing that the entire season after every Chiefs victory. Wait, there’s more. “Tackles For Kids” was another season-long campaign in which Nnadi invited fans and supporters to pledge money for every tackle he made. Alternatively, you could make a flat, one-time donation. Proceeds went to Boys & Girls Clubs. Nnadi also founded the Derrick Nnadi Foundation, based in Atlanta. The non-profit helps families and children in need in Kansas City and Virginia Beach, Virginia, Nnadi’s home town.

Another story has been making the rounds in social media that purports that Super Bowl LIV MVP quarterback Patrick Mahomes once paid the checks for everyone at a pizza parlor as thanks for fellow diners leaving himself and his girlfriend in peace during their meal. This may or may not be true, as a nearly identical tale was attributed to NFL Hall of Fame inductee Troy Polamalu back in 2009. Neither report has been verified.

Meanwhile, U.S. Senate impeachment hearings have only reinforced low public opinions of Congress, and exposed once again the devotion to self-interest of a majority of politicians. Being selfish is not in and of itself a crime, mind you, all individual humans are selfish to one degree or another. What should be unforgiveable is disguising selfish desires as something that benefits the greater good. This was an actual argument put forth during the hearings by Presidential attorney Alan Dershowitz. Various interpretations have been offered, but even in defending his argument against impeachment, Dershowitz stands by the idea that if the President believes his re-election is in the interest of the nation, then soliciting campaign help from a foreign government is not necessarily a criminal act all by itself.

Regardless of the validity of those arguments, it appears obvious that the intent is to protect not only the President, but an entire political party that has fallen into chaos, and sunk to a new low in a desperate attempt to protect extreme white male financial privilege at all costs. Only a tiny fraction of the nation has its interests protected under this kind of….rule.

How ironic that we continue to expect the worst behavior from supposedly “entitled” professional athletes, who are mostly people of color, while we stubbornly refuse to acknowledge evidence of willful, unethical acts by our elected officials, who are usually Caucasian males. Cultural and institutionalized racism, and oppression of women are two reasons why. What are we so afraid of? When did sacrifice for the greater good go from being a virtue to a sign of weakness?

Yesterday, my wife and I were presented with an opportunity to benefit a charitable organization that was tabling in the cold and snow outside a dining establishment here in Colorado Springs. ChildHelp.org is a non-profit that has existed since 1959, but maintains a low profile to reduce overhead costs. The current mission, as the two spokesmen explained to us, is to provide backpacks, basics like a toothbrush and toothpaste, school supplies, and toys for abused children, locally. I decided to purchase two.

We went to buy groceries after that, and I was surprised to find my card was declined. I was able to resolve that a couple hours later at my bank. The charity transaction was interpreted as suspicious activity, and perhaps now I know why. Childhelp has a reputation for turning one-time donations into recurring, automatic transactions. Wow, no good deed goes unpunished. I am not looking forward to the problems others have had with this organization. I decided to call the bank today to preempt any further transactions, but the one has not posted yet. I'll have to call again tomorrow, after it is posted, to avert recurring charges. I do not trust ChildHelp to behave itself.

I hope I can maintain my good will towards others, but maybe I’ll have to start my own foundation, like Derrick Nnadi, instead of entrusting others who may or may not be on the level. Further erosion of public trust, and trust in our family, friends, and neighbors, is going to be the death of our civilization. We must correct that before we can accomplish anything.