Earlier this week I attended two local events billed as opportunities for civic engagement. I am still trying to decide if they were a waste of time. One was a “listening tour” of a state non-profit organization that serves as a liaison between Colorado government and a handful of other non-profits concerning disbursement of lottery funds to outdoor recreation and protection projects. Attendees did most of the listening, to presentations outlining updates to the goals of the organization. The other, larger event was a mostly one-sided panel-and-moderator discussion of the future of urban growth in Colorado Springs. The two forums did open my eyes to something I had been blind to, though. We collectively fail time and again to accommodate, let alone welcome, marginalized parties, at least in meaningful numbers. 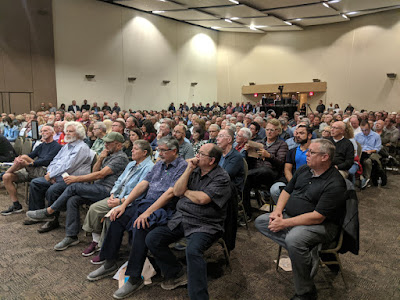 The attendance, and leadership, at both events overwhelmingly reflected white privilege, and mostly on the elder end of the age spectrum, too. That this has become what I expect is a tragedy in itself. I am modestly proud of myself for starting to notice, finally, and not being happy about the lack of involvement by people of color.

The urban growth event was so heavily weighted towards seniors that one of the speakers was the Colorado head of the American Association of Retired Persons (AARP). It became a running joke that each of the panel members, five of them, all white men, were either members already, or had recently received an invitation to join AARP.

What do I mean by white privilege in the context of the attendees in civic engagement events? Simple. We have the luxury of free time. We are not working a second or third job, or a second shift, in the late afternoon or evening when such events take place. We have the luxury of at least a modicum of disposable income for communication technology, and to fuel our vehicles to drive to meeting locations. We enjoy the advantage of not being hassled by law enforcement when we show up in locations where non-whites would be met with suspicion, if not hostility. We are able to understand everything being said at meetings because English is our first language. We know our opinions will be met with respect from our white peers, and that no one will question the authenticity of our experiences because they are shared by others. You can probably add additional points to this bullet list.

Oh, I already have another one. The “listening tour” did provide an opportunity to take a survey….by texting. I have a flip phone with less than instantaneous speed. Luckily, a paper-and-pencil option was available, but increasingly there are assumptions made as to the minimal level of technology utilized by citizens. This further marginalizes people who cannot afford those devices, wireless networks, and other supposedly universal products.

The responsible growth forum addressed Colorado Springs and El Paso County, an area that is expected to exceed Denver in population and geographical urban footprint in the not-too-distant future. The only thing worse than unbridled urban growth is growth for whites only….but that is the direction we are headed if we continue to prohibit equal participation in public conversations like this event. I will give civic leaders the benefit of the doubt and suggest that overwhelmingly white participation in public policy-making processes is not by design, but it still reflects a willful ignorance of the factors limiting participation by non-whites, and those who do not speak English.

The treadmill process that yields white privilege authority figures occurs when you have white privilege participation in all civic matters from voting to public hearings and meetings, resulting in the election of white privileged public officials, who then assume their constituents all enjoy the same circumstances as their white privileged benefactors and supporters….In instances where a person of color is elected or appointed, white privilege still colors their agenda, still enforces the boundaries of any meaningful reforms that could result in broader participation and increased leadership by people of color. Shameful.

Does it make me a “white savior” to be pointing out these systemic problems, these unquestioned attributes of institutional racism? I hope not, as that is not my intent. I am sharing my personal observations and interpretations, not putting words into the mouths of others, even fellow Caucasians. We have to start stepping back, take supporting roles, and even then, only when invited to do so. The irony is that all people will benefit and advance from diversity in leadership. I am supremely confident of that.