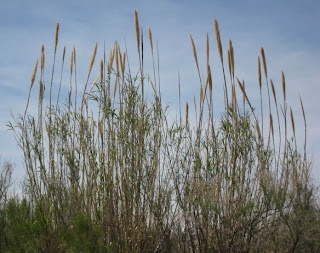 I wanted to publish a blog entry on giant cane, a plant that has been deemed an invasive species here in Arizona, but could only find glowing descriptions of that native bamboo, with no state west of Texas being in its range. Silly me, I got confused between giant cane, a largely beneficial domestic grass, and giant reed, apparently the epitome of foreign evil.

Who can fault me? As if the common names aren’t confusing enough, even the genus names are nearly identical: Arundinaria for giant cane, and Arundo for its reed counterpart. The similarities seem to end there.

Giant reed, Arundo donax, is thought to be native to east Asia, but has been so widely cultivated, for thousands of years, in that region, southern Europe, northern Africa, and the Middle East, that its point of origin is difficult to ascertain. The plant was (surprise, surprise) imported to North America as an ornamental from the Mediterranean. It arrived in Los Angeles sometime in the early 1800s. Its popularity ensured its spread, and it now occurs in feral populations across most of the southern U.S. north to Missouri and West Virginia.

What is a wetland plant doing in our Arizona desert? Deep roots can reach water tables near the surface of even ephemeral watersheds. Once established, two- to three-year-old stands of giant reed are remarkably drought-resistant. North American populations reproduce via rhizomes that sprout clones stretching over several acres in some cases. The rhizomes themselves can assume the form of dense mats over a meter thick. Flooding events break off chunks of those mats, and carry the species to new territories downstream.

Giant reed appears to have almost no redeeming qualities. Unlike the native cane, giant reed is not palatable to livestock or wildlife. It is, in fact, full of vile, poisonous compounds like cardiac glycosides, sterols, and alkaloids.

Further, giant reed is arguably a fire hazard, and it is for this reason more than any other that its presence causes so much consternation. Not only can it fuel a wildfire, but the plant won’t be killed in the process. There are accounts of scorched rhizome mats sprouting new shoots two feet high only two weeks after some California fire events.

So, is it any wonder that there is even a volunteer army dedicated to ridding Tucson of this botanical menace? Just check out the Tucson Arundo Removal website for more information. See also the U.S. Forest Service Plant Database, where I gleaned much of the information for this profile. Is it giant cane or giant reed? Donax, don’t tell I say.