On Pima Street, near its intersection with Magnolia Avenue here in Tucson, Arizona, there is a series of artworks with a local wildlife theme. The majority appear to be lizards. That is fitting because lizards are abundant here, even right in the city itself.

Near a bus stop close to Rosemont Avenue there are these two metal lizards mounted on a couple boulders.

They do appear to be basking when the morning sun hits them.

On the other side of the street, inlaid in the sidewalk, is this design, 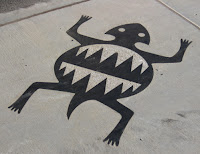 a wonderfully impressionistic representation of a horned lizard that also echoes the artistic style of local Native American nations.

Another inlaid piece is this one.

I’m not certain which species, if there even was one that served as a model, this is fashioned after. Tree lizards, spiny lizards, and whiptails are all pretty common, plus the introduced Mediterranean gecko.

Lastly, there is this deeply carved and painted lizard, with a scorpion companion,

in a retaining wall at the corner of Pima and Magnolia. There was also a jackrabbit, inlaid in the sidewalk near by.

Public art receives its share of criticism, but there are plenty of examples, like these, of appropriate themes that reflect both the natural and cultural history of a place. It may be local art, more than any other factor, that truly gives an urban place its character and uniqueness. I don’t mind my tax dollars paying for such enchanting decorations.