First let me say that I owe my friend Cheryl Malone a debt of gratitude for turning me on to digital photography back in February. She lent me her PowerShot SD1000, one of the “Elph” models that Canon puts out. The ability of that camera to overcome my timidity and total incompetence was amazing. I barely know an F-stop from an aperture. The experience was so satisfying that I knew I had to get a camera of my own.

I wanted to be able to shoot images of both insects and vertebrate wildlife, so I started doing research, and asking advice from photographers who’s work I admire. Since I was losing my job imminently, I also had a pretty strict budget.

The little Elph is likeable for its compactness, ease of use, and astonishing close-up capabilities. When it comes to getting an image of a bird smaller than a turkey, however….For example: 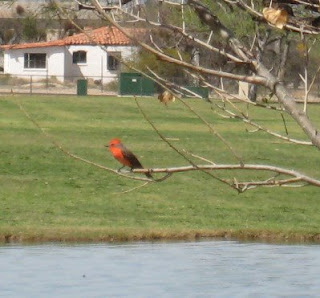 You pretty much have to take my word for it that the red blob is a vermillion flycatcher. The 3x zoom, and added digital zoom, really doesn’t cut it very well.

Several photographers tried to talk me into getting a refurbished DSLR with a versatile lens. They were being politely optimistic. No way am I sophisticated enough to wield one of those, and if I were to lose it or damage it, I couldn’t easily replace it. Thanks to a saint named Troy Bartlett, who actually went to a camera store and examined the two camera models I had narrowed my choices to, I confidently purchase a Canon SX10 IS, a “super zoom” that is just a step below a DSLR.

The kind folks at Greg’s Camera Shop here in Tucson spent an hour with me last Friday going over the basics. They even turned off the automatic digital zoom, which often destroys an image rather than enhancing it. The next day I took it for a test run, and could not have been more pleased.

I honestly had no idea what this bird was when I zoomed in and took the shot, but after downloadloading the image to my computer and cropping it, Voila! 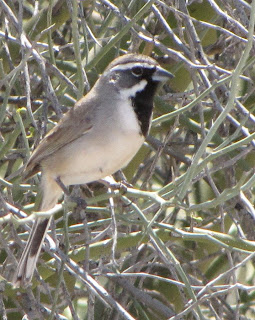 It’s a black-throated sparrow! This camera, with a 20x zoom, even overcomes my inability to stalk a subject.

Cheryl probably didn’t know what a wonderful new world she was going to open to me, simply by trusting me with her camera and encouraging me to “Go play.” I’d like to pass along the same sentiments to anyone else contemplating digital nature photography.