The Cape May area of New Jersey has an abundance of birdwatching activities during the fall migrations. One of the best is the Avalon Sea Watch held in the town of Avalon. The watch is on from September 22 to December 22 every year, and is operated by the Cape May Bird Observatory. 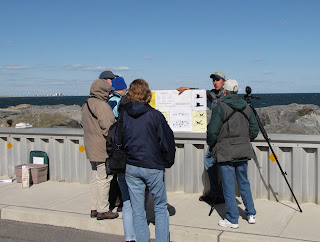 Abigail Parker, Heidi Genter, and myself visited the sea wall site of the seabird tally on October 16, 2010. We arrived just in time for a presentation by a volunteer from New Jersey Audubon. He described how to identify the more common seabirds. Believe it or not, you can identify many birds by the flight formation of their flocks, and how high off the water or horizon they fly. A diagram on an easel offered a visual aid as the guide described the silhouettes and behavior of the various birds.

Right in front of us, on the rocky jetty beyond the sea wall, were a handful of various birds, including a flock of Black-bellied Plovers, in the image below. Among them is another bird, possibly a Ruddy Turnstone. 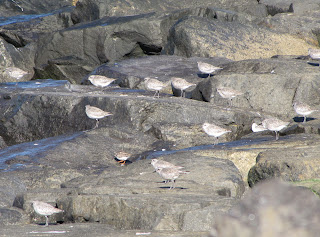 Eavesdropping on the presentation was a Herring Gull. This gull was such a constant presence that it was christened “Jake” (if I recall the name correctly). Jake was no doubt waiting for a handout, but he was most polite and patient. His colleagues were not always so well-behaved. A walk out on the jetty among fishermen and other tourists found another gull determined to make off with someone’s bait fish. 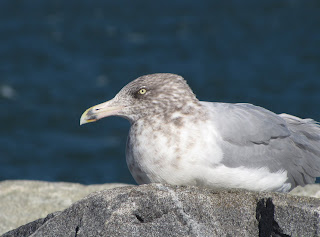 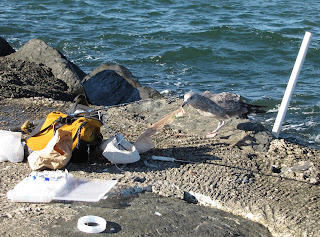 The wind was ferocious, and forced some of the shorebirds, like these Semipalmated Plovers, to seek shelter behind whatever rocks they could find. Western Sandpipers (yes, Western sandpipers!) joined them, and birds of both species tucked their faces into the feathers on their back to avoid the onslaught of blowing sand. Sunglasses are recommended to you for just this reason. Blowing debris will ruin anyone’s day. 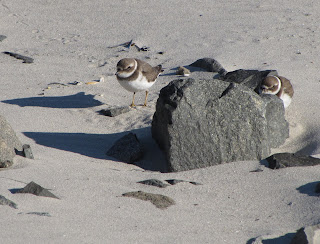 The dedicated volunteers that tally the birds from dawn to dusk, day after day, are to be commended. The data amassed by such dependable folks will help determine the health of bird populations in North America and help direct conservation efforts where they are most needed. Oh, and the average annual count is nearly 800,000 birds since it began in 1993. Among them are flocks of cormorants like this one. 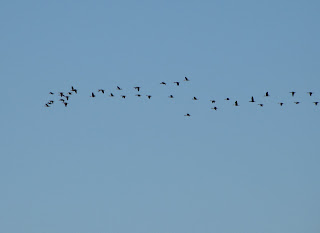 I highly recommend the Avalon Sea Watch for anyone, from novice to expert birder. You are certain to see a good variety of birds in a very short period, no matter what time of day you arrive. Dress warmly, though, and don’t forget that eye protection.