I am still in relative shock and denial over what is going on just across town here in Colorado Springs. We are facing a wildfire that threatens the entire northwest quadrant of the city, plus the Air Force Academy, Monument, Palmer Lake, Manitou Springs (where Heidi and I were wed), Woodland Park, and several other small communities. All of those locations have either been evacuated or face imminent evacuation as I write this. A total of more than 32,000 citizens have been displaced so far. 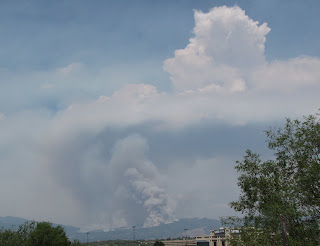 The images here are from late Sunday morning, June 24, when the fire was just a tiny, reasonably tame thing. It has since ballooned into a monster, especially as of Tuesday afternoon, June 26. That is when a thunderstorm to the northeast of the fire produced an “outflow” of air that changed the wind direction and intensity. A sixty-five mile per hour gust drove the flames into Queens Canyon, funneling the fire right into the subdivision of Mountain Shadows. The aftermath has revealed many homes and other structures destroyed.

I feel strangely detached, having moved here only last October. Still, I do know some people who have been evacuated. Heidi, my wife, knows far more and is devastated emotionally. Physically we are fine, though we have simultaneously experienced a record-setting heat wave here that finally broke today. The air quality ranges from tolerable to heinous, depending on the wind direction. I itch all over and haven’t worn my contact lenses for two straight days. It is useless, if not downright idiotic, to go outside if you don’t have to. 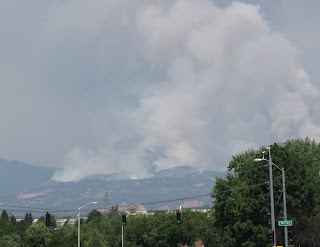 Many places I have been visiting in search of wildlife and wildflowers are either closed, threatened by the fire, or already burned. City bus service was suspended today. The television is, understandably, non-stop news reports on the fire, those fighting it, and those affected by it. This is my reality right now, with no end in sight. The fire remains only five percent contained. Officials predict it will be at least the middle of July before it is fully contained. We are hoping the annual monsoon storms are on time, if not a little early.

Colorado Springs is one of the top ten cities in the nation for “urban-wildland interface,” making us extremely vulnerable to disasters like this. Now, if rain does come, there is nothing to absorb it. We will face flash floods as a result. Meanwhile, thunderstorms devoid of rain threaten to fan the flames with more wind gusts, and/or spark more fires with dry lightning.

Those inquiring about our safety (Heidi and myself), and the condition of the Cheyenne Mountain Zoo will be relieved to know that our residence is on the east side of town, south of the fire; and that the zoo is also far south of the blaze. Firefighters are unyielding in shielding the south side of highway 24 from the fire. Should it jump that roadway (which is currently closed to all traffic but emergency vehicles between here and Woodland Park), all bets are off. 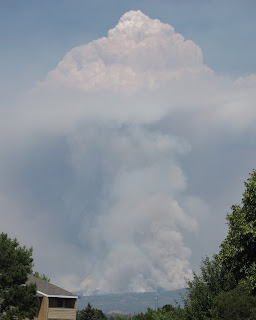 Interstate 25 marks the eastern boundary of the fire so far, and indeed it has not reached that freeway. Assuming the grasslands of the high plains are as equally flame-prone as the drought-stressed forests, then we need to keep the fire at bay along that boundary as well.

We, as a city, county, and state, appreciate the empathy and sentiments expressed from around the rest of the country. We return those thoughts to those facing catastrophic excesses of rain from tropical storms and thundershowers (Florida and Minnesota). I’ll keep you appraised as best I can on the situation here as it unfolds.