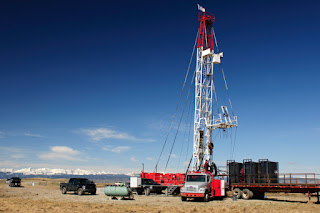 I was already aggravated by the incessant television commercials here in Colorado that are promoting fracking, a method of natural gas and oil extraction that uses pressurized chemicals to fracture bedrock in order to "free" the desired natural resource. This week, we get Gale Norton (yes, that Gale Norton) stumping for Protect Colorado, the greenwashed front for the oil and natural gas industry. This raises my degree of ire even higher.

She also served as Colorado's State Attorney General, 1991-1999, and has returned here where she is apparently her own corporation, Norton Regulatory Strategies. She also served as general counsel to "Royal Dutch Shell Unconventional Oil, 2007-2010. She was a member of Shell’s global legal leadership team, and handled legal, regulatory and governmental issues for Shell’s oil shale and in-situ oil sands projects, primarily in Colorado and Alberta." That according to her Norton Regs website.

Norton has managed, successfully, to greenwash herself, masquerading as someone who truly cares about the environment and sustainable energy, thanks in large part to her former employment overseeing public lands. No wonder Protect Colorado finds her to be such a perfect spokesperson.

Understand that we are treated to at least one pro-fracking television commercial in prime time every single night. It is the industry's right, of course, to exercise their free speech. They are paying handsomely for the chance to broadcast their message, but that is exactly my point. They can afford to make their case publicly, night after night. Not so for any group opposing them. Just because you are the loudest voice, doesn't mean you should be the only voice.

It is common courtesy to allow both sides to have their voice in debate of an issue. In my opinion, it should be the law. On issues as contentious as this one, both views should be granted equal time to make their case. This is also why the Supreme Court case of Citizens United needs to be overturned. The essential outcome of that decision was the "money equals free speech" doctrine that now dominates public discourse, certainly skewing the course of said discourse.

Advocacy groups involved in issues of free speech need to brainstorm another way to circumvent Citizens United until we get a constitutional amendment stripping corporations from the overwhelming advantage they have in the court of public opinion on issues like fracking that threaten public and environmental health.

Can you imagine where we would be today if oil and natural gas corporations were not so greedy in pursuit of profit, seeking from day one the elimination of competing, renewable, energy industries like solar and wind? It isn't just energy, either. The automobile industry has steadfastly opposed funding for public transit, while garnering huge government subsidies and outright bailouts. The cotton, pulp and paper, and plastics industries have all convinced us that hemp is a drug threat needing regulation if not prohibition, when in reality hemp is nothing but a more durable and preferred alternative in the manufacture of products from clothing to acid-free paper.

Back to Norton and her spokesperson role. We have apparently not yet graduated as a culture from the era of snake oil salesmen and other con artists. In fact, we are now appointing them to office and allowing them to swindle our faith in those who govern. It is up to us not only as consumers, but as citizens, to do a background check on those who purport to have our best collective interests at heart.