When the Dog Bites 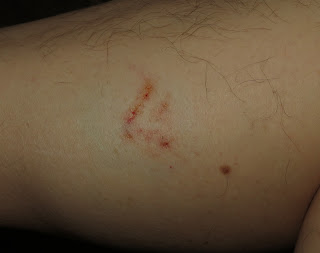 The back of my right calf, courtesy of a dog

I am not usually hard up for material anyway, but occasionally something happens in my personal life that disturbs me enough to prompt a post. I was bitten by a dog the other day. Yeah, that will get your attention, even if it was a little yippy-yappy thing. In the wake of the event, all my other encounters with aggressive canines came flooding back along with long-buried hostilities and unresolved conflicts.

I take a walk through my neighborhood almost daily, and Thursday, November 17 was no exception. At one point in my route, which I have passed countless times, a pair of small terrier-like dogs were playing in a yard. As I passed on the sidewalk, they barked and gave chase, nothing terribly alarming....until I felt pressure and a mild sting on my calf. I was so surprised that the little nipper may have gotten me again, though not as acutely. I backed out into the street shouting "Hey!" numerous times, loudly.

A neighbor across the street was silently raking leaves and witnessed the incident. He might as well have been a statue. I asked if he knew who owns the dogs, and he pointed to the next house. Indeed, the pair of pooches ran there next, still barking. The one that bit me made efforts to do so again. More shouting from me, into the open garage of the owner's home. Nothing.

I finally shouted the house number and told them they needed to get outside. A petite Hispanic woman eventually emerged. I told her rather angrily that one of her dogs bit me. She told me to "calm down," and barked commands in Spanish that sent the mutts running into the garage. I repeated, even more assertively, that one of her dogs bit me. As she made for her garage I said she better pray that I don't get an infection out of it; and she muttered back something to the effect of "I hope you don't get an infection, too." I'm giving her the benefit of the doubt that is what she said, anyway.

Upon returning home in snow and rain, I discovered that at some point my mobile phone had been lost. I exchanged my coat for a rain jacket and headed back out. I found my phone easily, and though it was wet it was still operational. Now, I finally turned my attention to the bite, and found that despite heavy jeans, it had broken the skin. The bite most resembled an abrasion, though, so I didn't treat it except for showering later.

Taking to social media, I found out that, by law, you must report pet bites to the proper authorities. Here in El Paso County, Colorado, the Humane Society takes care of that. I answered a few questions and told them I had no malice toward the dog, or even its owner, despite her unsympathetic nature. I hoped the dog would not be removed for quarantine and was assured that a ten day in-home quarantine was standard.

It was interesting to read some of the responses to my post on Facebook. Some of my friends were only mildly sympathetic, too. Several even gave the thumbs-up "like" to my status. Not sure why I deserved that. Others commented that "at least it was a canine [and not a cat]." Cat bites are really bad news, I'm told. I politely replied that I am not generally in fear of being attacked by felines during my walks.

The whole cat versus dog thing is really starting to get my dander up. Far more people pile on the cat-hater bandwagon than even acknowledge the danger that unrestrained dogs pose to other pets, wildlife, and people. Then again, we all know that the only "good doggie" is yours, right? I am guilty, too. Logan was an adorable dog. All the other canines in the neighborhood were pretty much Cujo. I recall occasions in which I had to maneuver myself between Logan and some off-leash, unfriendly dog to avoid something heinous from happening.

I do believe pet-related laws need more tooth to them; we need harsher punishment for irresponsible pet owners, dogs or others. I am not a mace-carrying, knife-wielding, or gun-toting pedestrian, and never intend to be; but, bear in mind that the demeanor of your pet speaks volumes about you, too. I am not inclined to have a positive opinion about your personality if your dog is belligerent, loud, and otherwise obnoxious. Forgive me if I don't believe you when you say "he won't bite."