About the Safety Pin Thing 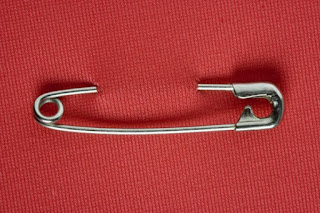 It appears that no good deed, or symbol, goes unpunished right now. Take the safety pin, which some American citizens have taken to wearing on their clothing. We'll get into the meaning of that, but you'd think they were wearing swastikas or something given some of the social media backlash. My own bottom line? I'm wearing the damn pin.

The U.S.A. cannot take credit for the origins of the safety pin phenomenon. No, that would be Great Britain, in the wake of the "Brexit" fiasco (though the initial idea seems to pre-date that event, too, according to a Snopes.com article). Along with the desire to separate from the European Union came a minority opinion that it was also time for refugees and immigrants and other minorities to be expelled from the UK. These vulnerable groups were met with open hostility by thugs who thought the vote gave them license to be abusive. Wearing a safety pin became a message of solidarity with those groups being persecuted.

Fast forward to the current situation in the U.S. where our recent election has likewise inspired hate crimes or at least incidents that come dreadfully close to falling into that category. People of Color, immigrants, refugees, lesbians, gays, bisexuals, transgender, and queer individuals, as well as women (regardless of whether they are in any group other than....women) are all experiencing insulting, intimidating, and violent conduct by....well, I have no words to begin to describe the lowlife scum conducting themselves in this manner.

Many folks here have now taken to wearing the safety pin as not only a show of solidarity, but as a symbol that says "I am a safe person to approach, to seek refuge in situations where you feel fear or are being taunted or victimized." Well, to hear some people frame it, the safety pin is just another prop to make Privileged White people feel better about themselves, to assuage their guilt for having let things get out of hand in the first place. It is an empty promise, and literally the least they can do for the underclass in lieu of making donations to organizations, volunteering at the soup kitchen, or whatever else is deemed more helpful and demonstrative if one is truly empathetic. To be fair, those accusations of "slacktivism" might have some merit. I will admit I don't go out of my way too much, as often as I should, for anybody, regardless of their circumstance. Still, I think the safety pin detractors are missing the point.

The safety pin is not about race, gender, sexual orientation, economic class, or anything else aside from HUMAN DECENCY. Excuse the "shouting," but this is about demanding that ourselves and others behave in a manner acceptable to each other regardless of our differences, visible or not. We who wear the pin recognize it as a badge, a way of deputizing ourselves as ambassadors of good will and decorum.

Let me tell you this: should I ever witness a situation in which someone openly supportive of President Trump faces unprovoked insults or intimidation tactics, I have that person's back, too. We are all guaranteed the same rights, regardless of political affiliation, too. I suspect it won't be long until we all denounce both Republicans and Democrats anyway, as completely unresponsive to the electorate.

What good is accountability if we demand it only of our public officials, and not of ourselves and each other as ordinary citizens? Hostility makes us no better, and arguably worse, than politicians. There is a fine line between being assertive and being angry. I am not sure that either Trump or Hillary Clinton understands that. I am very sure that too many of our electorate don't get it, either. For now, I will gladly wear a safety pin as a symbol not only of solidarity, but of empowerment, no matter which side of the political spectrum you are on.