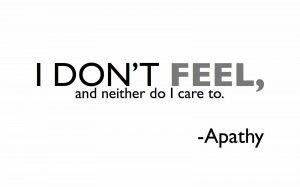 A few days ago I posted this statement to my Facebook page: "I am angry because I fear the only other option is apathy." I was curious as to the responses, and I was not disappointed. The comments reflect a wide spectrum of viewpoints and coping strategies in our troubling times.

I find that my mind often perceives things as black or white, as limited to only a couple of points on the spectrum. I have been known to become impatient with people who do not express outrage at what I see as an injustice or other wrongdoing, usually inflicted by a government agency or policy, or a private corporation or religious institution. A lack of response in the face of egregious acts I see as either agreement with the action, or apathy.

Why don't you care?! How can you not be as angry as I am? Do not get me started with "life isn't fair." Our only responsibility while we are on this planet is to do our best to make life more equitable. We have instead allowed ourselves to be channeled into a way of thinking that elevates the attainment of vast personal material wealth as the highest degree of success....but I digress.

The responses to my statement were more concerned with personal psyche than with whatever triggers anger. "Anger is only good if you use it for organization towards a goal," wrote the person who replied first. "I go with rage, because horrific sadness sucks," said another. "True...stay with anger," wrote another in agreement.

The next response was perhaps the most revealing, and puzzled me: "Have you tried empathy? I helps me when i get where you are at." That somehow made me even more frustrated, and I answered "My empathy often incites my anger. I have an intense sense of justice and fairness, and of course the world is anything but." Farther down in the comments was a similar answer: "I know how you feel, Eric. And my only statement is this: Empathy expands you while anger only shrinks you. Small words, I know."

No, those are profound words which got me thinking, after I wrote " But I AM empathetic! That is where a lot of my anger comes from: injustices to people I empathize with." What next entered my mind, but which I did not communicate outright, was something to the effect of "do you expect me to have empathy for irresponsibly affluent people, for racists, for bigots, for those who put profits above environmental health? Am I to empathize with people who deny others the right to affordable housing, healthcare, food, and opportunity?" I cannot imagine that is what you mean, but if so then I need to reconsider some of my social media friends.

I am not sure why more people do not see the link between empathy and outrage. You cannot witness injustice after injustice and not be driven to madness....unless you benefit from the status quo. "I too am angry," wrote another friend. They continued "It doesn't help. Neither does the immense sadness I feel. Between the two I am stuck. We have politicians who deny climate change, and politicians who acknowledge it, but refuse to do anything on their watch. I am 74, and will live to see the devastation and great extinctions. They are already happening. I think I am doing what I can. It is not enough." I would argue that sometimes it is enough to simply express solidarity with other empathetic people.

Another sentiment: "Rage, grief, when it's too much, sometimes a numbing sets in. When it hurts too much to care... Everyone has their own way of dealing. Some become apathetic and some don't recognize how much they've changed until an event occurs in their life to wake them up again. Some never wake up. Some never feel alive again. Some fight all of it within and some are lucky enough to have a life that sustains their spirit. Many are not so lucky." Well said, friend.

"I believe ACTION is a third option," mentioned another person, and my response was that I am very much an "idea man." I am horrible at taking action on those ideas. I often don't know where to start. That is why I write. Another person chimed in "Writing is action. And, if compelling, it propels other people to take action. We cannot sit by paralyzed by depression, disappointment, inertia, whatever! The stakes are much, much, much too high...."

I was reminded by another that it might help channel my anger if I read more: "It occurs to me that I ought to read Viktor Frankl’s Man’s Search for Meaning. We’re all talking in affirmative messages that are pertinent for 'normal' times, and they’re still true but don’t feel proportionate to the current set of catastrophes. I want to see how a man got himself through a time when the world was completely falling apart.

What do you do in the face of injustice and misguided priorities by those in power and those who do not know better because of ignorance? Are you shopping differently in the marketplace? Writing and calling your public representatives? Practicing civil disobedience? Please share your ways of coping, and changing the world. Thank you.