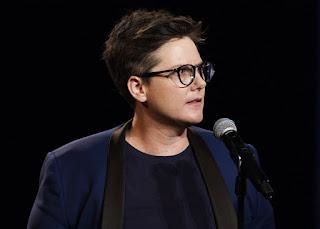 Hannah Gadsby is an Australian-born comedienne. That is all you need to know before watching her Netflix special Nanette, because she explains the rest of her life experiences in that stand-up special. And you better brace yourself. Or not, because maybe not knowing what you are in for is at least half of what makes this performance worthy of its critical acclaim.

The best comedy delivers not just laughter, but provokes thought, emphasis on "provokes," and this is flat-out the most provocative writing I've seen performed on stage in decades. As another critic pointed out, it gets the audience to question themselves, and their role as either instigator or ignorant bystander, in the atrocities perpetrated against people from varying walks of life who we identify as "the other." Done incorrectly and you have the audience storming out of the venue. Done brilliantly, like this, and you have everyone's rapt attention.

If you do not see yourself in every facet of this monologue, then you lack empathy and honesty.

A graph of your comfort level during this seventy minute show would likely look like something off a seismograph, but that would be fitting because this is an earth-shaking episode. Part of the premise that got the attention of critics is that this was Gadsby's swan song, that she would be quitting comedy because....well, I am not going to spoil that for you. Gadsby is apologetic at one point for being so angry, and taking out her frustrations on her audience.

I disagree with Hannah that she is angry. She is assertive and emphatic, and displays a degree of strength that transcends gender, class, or any other category we so conveniently put each other into. If you do not see yourself in every facet of this monologue, then you lack empathy and honesty. This is funny, but at its core it is a plea for self-evaluation, and assessment of your own personal code of conduct.

Does the audience really deserve to be made so uncomfortable, though? The unequivocal answer is a resounding "Yes!" There are many ways to be "woke," and this is one of the tamer routes. It is like the tear-jerker rom-com movie, albeit a great deal more intense in parts. You may leave the show with feelings of shame and guilt. So? What are you going to do with that? This is really what the heart of great entertainment is all about: a jumping off point (not off a bridge for crying out loud) for self-conversation, for deciding how to redeem yourself. How best do you participate in the revolution?

Hannah Gadsby's writing and delivery are passionate and compassionate, despite her belief that she is just angry. You still want to give her a hug and say "Thank you!" when all is said and done. She manages to maintain the vulnerability we all have, that makes us caring human beings when we acknowledge it. Some will say that Gadsby gets her audience cheering for their own execution, but if you have been listening, you see a bit of your parents, or best friend, the people in your life who will not always tell you what you want to hear, but what you need to hear.

I hope Hannah Gadsby won't quit. We desperately need her voice, day in and day out. Heck, we need more people like her. Watch Nanette, it is must-see TV or streaming or whatever you call it.