A couple weeks ago I was watching CBS Sunday Morning and a story came on about the "Central Park Five." This true story is now on Netflix as the docudrama When They See Us, coming May 31. I am old enough to remember the sensationalized press coverage of the April, 1989 case, but the outcome for the unjustly accused never made the same media impact. This is how it works: Make sure the public knows that the face of violence and mayhem is Black. Let any evidence to the contrary fall through the cracks, or even be intentionally suppressed. This is the storyline of our times, in overt and subtle variations, that we must overcome. 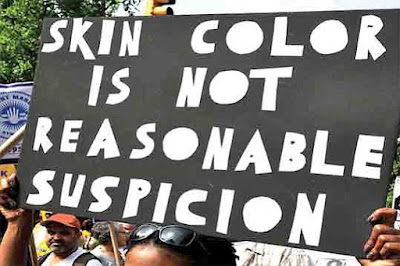 It has the capacity to be a self-fulfilling prophecy for minorities, especially African Americans. Eventually you will become angry and hostile when you are constantly faced with the assumptions of others (Whites) that you are angry and hostile. One could hardly blame any minority individual for becoming a criminal when they have been sentenced by assumption to being one already, yet that is hardly the case. Black criminals are a true minority in our society. The overwhelming majority lead honest, productive lives, and are miraculously tolerant and forgiving when they have every right not to be.

While watching the CBS segment it occurred to me to ask why there are no Black news channels. I went looking for the answer online and learned that there will be one. BNC will debut in November, 2019. There is even a countdown clock on their website. They will be broadcasting in the metropolitan areas where there are high populations of Blacks.

What is needed, though, is for White people to watch it. Caucasians need deprogramming from the constant portrayal of African Americans, Hispanics, and other minorities and immigrants as a threat. BNC also needs to be on one of the digital slices that now come free with traditional antenna reception, not something you pay for because....surprise....many minority households cannot afford cable or streaming services. Urban folks will likely have access, but rural White folks are, arguably, the ones most in need of an education in "black."

Why do we not assume the best about other cultures? We could improve our own lives a hundred-fold if we were interested and committed to learning. Black families are not "welfare queens" as much as they are grandparents, aunts, and uncles living on the same block if not in the same household, their elder experience benefiting multiple generations....We do not need to know about the next LeBron James. We need to learn about Black inventors in prime time, not on "EI" shows on Saturday mornings. We need to hear about Jerome down the street who became an Eagle Scout the other day, and Jasmine who will be giving her high school's commencement address as valedictorian. We also need to stop stereotyping names like Jerome and Jasmine.

You get the picture. None of us are immune to the ramifications of the status quo. We White folks are all guilty of perpetuating a society and culture that continually reinforces certain expectations of behavior and occupation of other ethnicities, appropriates other cultures, and repeats it in every news cycle, every piece of advertising, nearly every experience of everyday life. The problem is that we are not demanding accountability from the media, corporate, educational, and religious institutions that are doing it. We are not demanding enough of ourselves in refusing to participate. The only ones being punished, on top of being subjected to constant bigotry, are minorities. Caucasians need to stop being the spokespeople for other ethnicities and cultures. We need to listen, then change our ways. We need to fundamentally change our language to be more inclusive, then be genuinely inclusive.

I am an aging White male writing this, and rarely do I feel this awkward and ill-equipped when I put text to a Word file, let alone broadcast it on my blog. I stand ready to be educated, confront revisionist history, and help build the world I have always wanted to live in, where White Privilege is no longer a....thing. How about you?