Book Review: Underbug Will Unravel Your Mind, in a Good Way

Lisa Margonelli's Underbug: An Obsessive Tale of Termites and Technology (2018 Scientific American, 303 pp) offers a much bigger picture than a mere glimpse inside a termite mound. The book has a story arc as great as the universe, and as small as a microbe found in a termite's gut. It represents a metamorphosis of history, science, and the mind of the author herself. Part memoir, part journey, and all science and experience, it works brilliantly. 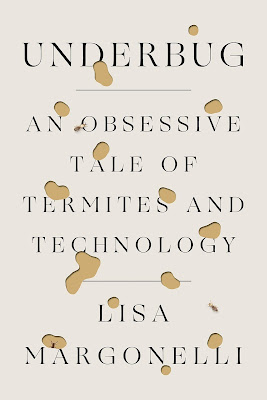 The only holes in Underbug are the ones in the dust jacket, a clever nod to the affinity of termites for all things cellulose and lignin, or derived from it. The irony that this work about termites will inevitably be consumed by them reflects a bit of the humor in Margonelli's approach, as well as the futility of expectations in scientific inquiry.

It came as a shock to this reader that the book was something of an afterthought that emerged from a....recreational(?)....fascination with scientific endeavors that Margonelli was pursuing at her own expense, without monetary advances and publisher deadlines. Who does that? Maybe the proper question should be why don't we (writers) all do that? I dare say this might have been a completely different book if the author had started with the intention of writing it instead of putting a wild horse before an organized cart.

If your brain is wired to go off on tangents while reading, Underbug will have your mind reeling, spinning off into the existential time and time again. Anticipating a dry-as-weathered-wood treatise on termites? Then you have another think coming; and another, and another after that. All your assumptions about insects, science, and even history and culture are in for a shake-up. This is exactly what our society needs to recognize: that while we may have a desire to compartmentalize our human activities, social groups, and our personal motivations and emotions, they all have impacts far beyond our habitual perceptions. Interconnectedness, distant consequences, ambivalence, and empathy are the major themes of Underbug, not termites.

Margonelli is one of the "new" league of women non-fiction writers who is able to insert herself into the story to the correct degree, conveying humility and struggle rather than bravado and arrogance as many male writers tend to do. She manages the perfect mix of participation and detachment, cultivating a bond with readers that only gets stronger as the story progresses. She shares your skepticism, but has relentless curiosity and a tenacious commitment to doing whatever she needs to in order to elevate her knowledge and broaden her horizons.

Termites, it turns out, are a nexus of ridiculously disparate scientific disciplines, and a metaphor for human societies. They span a scale that ranges from their miniscule bodies to continental landscapes. Well, smaller than that since termites rely on intestinal microbes to digest cellulose and lignin into compounds useful to the termite. Meanwhile, the mounds of many species utterly transform ecosystems. One can argue that termite colonies and their architectural masterpieces are ecosystems.

How such a "simple" organism can achieve such overwhelming success is one of the conundrums addressed in Underbug. Our failure (so far) to scale-up the termite's "engine" to produce "grassoline" and other biofuels is a testament to the complexity of insects and the limits of science and the human mind. Also, where does one termite end and the colony begin? Which of those two is the "brain?" What constitutes a "mind?" You may be left wondering if termites have it better than we do. The attraction of instinct, after all, is freedom from morality, freedom from responsibility for our actions, because we would not be cognizant of them.

We are nothing if not collectively selfish, being animals ourselves, able to execute our desires to eliminate competition from other species for scarce resources, minimize mortality factors such as predators and pathogens, reproduce freely with greater success thanks to advances in medicine, and to enhance our lives through technology. However, as Margonelli writes:

"We need to call technology what it is -- an abstraction of power, politics, and economics. And then -- if we are going to take ideas from the termites into our human realm -- we should use them to become more human, not less."

I cannot recommend this book highly enough, as a microcosm of concepts in critical need of addressing by the world community, and mulled over with regularity by us as individuals, families, and local communities. Oh, and to explorers looking for signs of intelligent life in other galaxies? You might be looking for interstellar termites.