Orion magazine once included a department entitled “The Place Where You Live,” where readers were invited to contribute their own biographies of the places they call home. I was fortunate enough to be published twice, once for Cincinnati, and the other for Forsyth, Missouri (see the blog entry for Forsyth). Since I did not receive payment for either piece, and because many years have passed since their publication, I will include them here. This piece appeared in the summer, 1997 issue, volume sixteen, number three. An editor at Orion actually helped me craft this piece, and my good friend Steve Pelikan was kind enough to take the picture that was requested to accompany the essay. This patch of wildness is just amazing in the spring, the season depicted here. 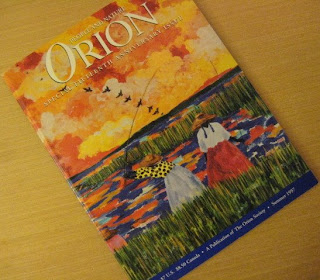 I define a place more by the living things that call it home than by the latitude and longitude, or even a name. Just the same, I call this “electric alley,” this place where the high-tension power lines stretch across the landscape, their gray, girdered towers marching up this ridge, down into the ravine, up the next hillside, and so on. The gas lines run underground, but between heaven and earth, between the aerial sizzle and the silent flow below, life pulses in the myriad plants and animals found here. 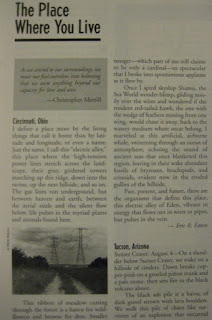 This ribbon of meadow cutting through the forest is a haven for wildflowers and browse for deer. Smaller fauna are in abundance: a brilliant, iridescent tiger beetle crouches in a dried-mud hoofprint, then takes flight at my approach; a leaf-cutter bee scissors a locust tree leaflet to line her nest tunnel, bored in a nearby log.

Color everywhere! Buttercups, dandelions, phlox, larkspur, and so many others for which I know no names. Indigo buntings add an auditory complement to their loud blue plumage. Then there was the scarlet tanager—which part of me still claims to be only a cardinal—so spectacular that I broke into spontaneous applause as it flew by.

Once I spied skyship Shamu, the Sea World wonder blimp, gliding noisily over the wires and wondered if the resident red-tailed hawk, the one with the wedge of feathers missing from one wing, would chase it away, back to the watery medium where orcas belong. I marveled at this artificial, airborne whale, swimming through an ocean of atmosphere, echoing the sound of ancient seas that once blanketed this region, leaving in their wake abundant fossils of bryzoans, brachipods, and crinoids, evident now in the eroded gullies of the hillside.

Past, present, and future, these are the organisms that define this place, this electric alley of Eden, vibrant in energy that flows not in wires or pipes, but pulses in the vein.