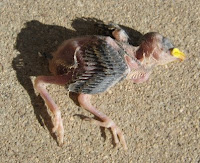 I don’t have a “life list” like some birdwatchers keep, but it occurs to me that between museum taxidermy mounts, roadkill, window-collision fatalities, fallen nestlings, and the holiday turkey, I have probably seen more species dead than alive. Couple that with captive birds at the zoo and the pet store, and the total far surpasses their living counterparts as species I have seen in the wild, flying freely and behaving naturally. What troubles me more than my own observations is that I would bet this sums up the experience of many other people as well.

The worst case scenario, of course, is viewing the taxidermy mount of a species that has gone extinct. I worked two years at the Cincinnati Zoo and Botanical Garden, and one of the most vivid memories I have is of “Martha,” the last known individual passenger pigeon, now mounted and displayed in a special exhibit there. That I, and anyone born after Martha’s death in 1914, should be deprived of even the opportunity to see wild passenger pigeons is a true travesty that should not be visited on any more species, or any more human beings.

Meanwhile, the carnage continues in ways we pay little mind to. Daily totals of road-killed birds in the U.S. probably run into the thousands, judging by mortality studies and estimates conducted previously. Collisions of migratory birds with windows, towers, cables, and other obstacles take a great annual toll. One objection to wind farms is that the spinning blades of windmills will spell death for many more birds. Oh, and look what the cat dragged in! Much as I love cats, feral felines and outdoor cats stalk and kill untold numbers of songbirds each year.

Introducing our children, and their parents, to the world of birdwatching will help cultivate an awareness of bird life and nature in general. It might be a good idea, however, to also remind folks that birds face many obstacles erected by Homo sapiens, and instruct them on ways to mitigate these problems. No one’s “death list” should exceed their life list.