Orion magazine once included a department entitled “The Place Where You Live,” where readers were invited to contribute their own biographies of the places they call home. I was fortunate enough to be published twice, once for Cincinnati, Ohio, and the other for Forsyth. Since I did not receive payment for either piece, and because many years have passed since their publication, I will include them here. This piece is in the winter, 2002 issue, volume twenty-one, number one. 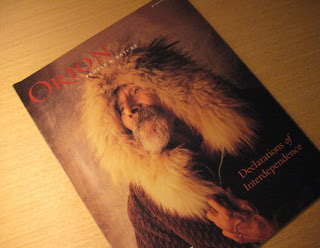 Call it the place where I lived, past tense. My presence here has been brief, abruptly terminated in a catastrophic downsizing event. That economic equivalent of geological upheaval seems fitting in this Ozarkian landscape. Shaped by powerful forces over the eons, it is still seemingly undecided, ecologically and economically, as to what it wants to be when it grows up.

Oak and hickory forests grow half-heartedly, perhaps in anticipation of their own demise in the next logging operation, maybe taking their sweet time with the meager nutrients offered by the rocky soils. Sometimes they give up altogether, yielding to the grasses and cacti that form mini-prairies called “glades.” The deep valleys are now flooded by a series of impoundments, the resulting lakes being stocked with exotic fish, and lined with poor man’s marinas and low-rent resorts. It is the split personality that comes from impoverished locals attempting to answer the intrusion of wealthy absentee landlords. Invasive enterprises in the city proliferate, exploiting what is there, sometimes at the expense of the natives.

In my small town of Forsyth, across the lake and a world away from Branson, life is more symbiotic. The county fair is still a major event, and spectators will turn out for even modest main street parades. Chain stores have barely made inroads, and most residents prefer the mom-and-pop merchants anyway. Still, one feels a palpable uneasiness. The indecisiveness runs like a fault line down the middle of Taney County. Will an economic earthquake forever alter the landscape, leaving ecosystems in ruin and thrusting strip malls upon the scene?

Progress is an imposed evolution here. The earth moves in great explosions where blasting makes way for the expanded highway between Branson and Springfield. Vultures hover over the valleys, adding an ominous presence, but there are also hopeful signs. We have lots of bluebirds, and there is a chance that voters will pass the billboard ban. In the meantime, the new cellular tower doesn’t block the lake view as it stretches from this schizophrenic landscape toward a limitless sky.