Friday the thirteenth is supposedly bad luck in American culture and folklore, but I found that March 13, 2009 was anything but an unlucky day. I was happy to find myself in the company of Jeff and Cynthia Boettner (see “Meet the Boettners” on my Bug Eric blog), visiting from Massachusetts, on the way to Madera Canyon in the Santa Rita Mountains south of Tucson, Arizona.

Upon our arrival midway up the canyon, we found the feeders at the Santa Rita Lodge to be bustling with activity. We were first greeted by the comical sight of several wild turkeys, Meleagris gallopavo, galloping around a pan-shaped feeder, trying their best to eat and chase off the competition at the same time. I did manage to snap a few shots of these magnificent birds, their iridescent feathers shining in the sun. 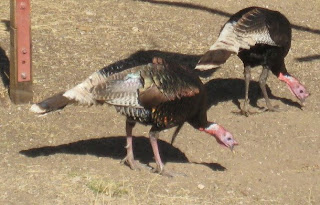 Gray squirrels were literally squatters in other feeders, and a Coues white-tailed deer, Odocoileus virginianus couesi, soon joined the circus. 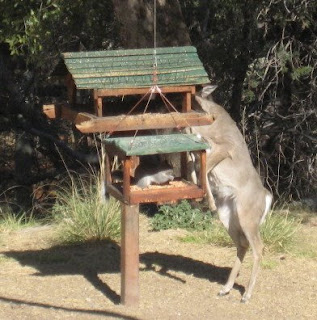 Among the many other birds in attendance were acorn woodpeckers, lesser goldfinches, a broad-billed hummingbird, and Mexican jays.

We eventually left the other spectators at the lodge and drove to the trailheads at the top of the canyon. We settled on “Super Trail 134” as our path of choice, affording a lovely view of Mount Wrightson even before we set one foot forward. 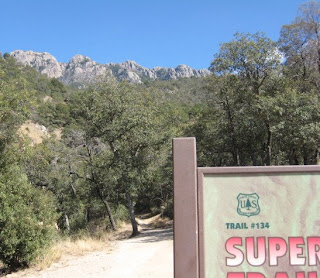 The trail meanders through what is mostly an oak-juniper habitat, quite rocky in places. We found an abundance of lizards basking on almost every available rock during the morning hours. The majority of these reptiles were “spiny lizards” in the genus Sceloporus, but the species here are exceedingly difficult to identify. 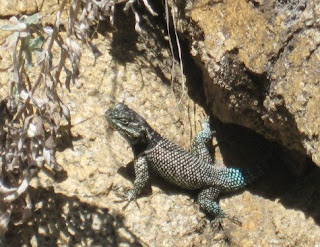 No matter, we enjoyed their antics and often splendid coloration, no doubt in preparation for courtship and territorial defense.

The hike was eerily quiet, save for our conversations, and greetings to other hikers. I suppose the silence was fitting for at least that portion of the trail that crossed into official “wilderness.” Unfortunately, just across the wilderness boundary, one gets an incredibly scenic view of a….mine (sigh). 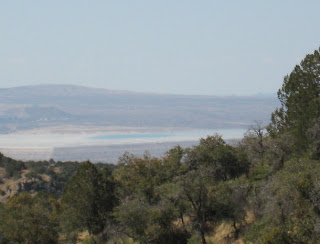 This part of Arizona is still highly vulnerable to natural resource extraction, thanks in part to mining laws that date back to the 1800s. These are our public lands, and I feel they should be maintained for present generations, future generations, and as a legacy of past generations that included the likes of John Muir, Gifford Pinchot, and Bob Marshall. The Coronado National Forest, in which Madera Canyon is located, is indeed a national gem worthy of respect and protection.