A casual lunchtime visit to the Campus Pond at the University of Massachusetts here in Amherst on Thursday, August 27, brought a sweet surprise. A family had taken up one of the stone benches at my favorite spot under a tree beside the pond. They were feeding the geese and ducks like many folks do, but one of the birds near the shore was clearly not a duck or a goose. It was a great blue heron wading just a couple yards away from them. 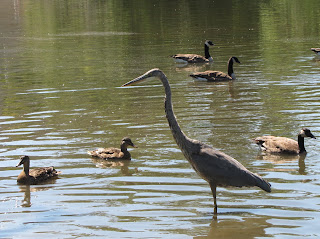 It seemed completely absurd that a bird I am usually lucky to spot from a football field away should be right there, like somebody’s pet, or a permanent resident of a wildlife rehab facility. No broken wings on this elegant animal, I saw it fly gracefully across the pond on a later date.

The scene this day reminded me of a story I read many years ago in Natural History magazine about herons and egrets (maybe pelicans, too) in Florida that had taken to hanging out on the docks and begging fishermen for part of their catch. The article was entitled “Brother Can You Spare a Fish?”

I had also heard a story when I first arrived here about an egret that frequents the Campus Pond and is equally habituated to humans. A young boy was tossing popcorn at the bird, which obviously ignored the overture. A professor passing by muttered arrogantly “They eat fish, not popcorn.” The next kernel the boy threw bounced off the egret’s head and into the water. A fish surfaced to investigate the morsel, at which point the egret nabbed the fish and took flight. The boy turned to the professor with a satisfying smirk on his face.

My home town of Portland, Oregon named the great blue heron the official city bird many years ago. There, it is even the emblem on an ale produced by a local microbrewery. I find it ironic that I would have to go across the entire country to get this close to one, but I’ll treasure the memory. 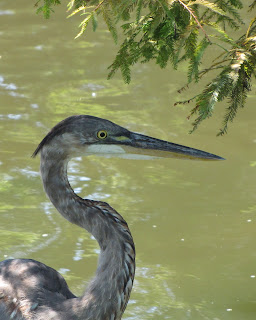