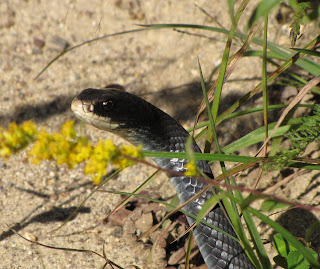 My friend Lynn Harper and I happened upon one of the more regal of New England reptiles on Saturday, September 26, while taking a walk through the Montague Plains Wildlife Management area in Franklin County, Massachusetts . The northern black racer, Coluber constrictor, is normally quick to flee from the slightest disturbance, but this snake was an exception.

Strolling down the sandy trail I froze in my tracks when I spotted the serpent. So did Lynn. So did the racer. We all seemed mesmerized by each other. I did manage to bring my camera up to try and get an image, and despite the obligatory foliage between me and most of my photographic subjects, I got off a few respectable shots.

Black racers are not uncommon this far north (they even range into southern Maine), but the best observation one usually gets is a glimpse of a shiny black snake slithering quickly out of view. They are known to occasionally take refuge among branches and other vegetation, but in my experience they seem to vanish into thin air, or at least down some unseen rodent burrow.

I was also taken aback by the size of the snake. At first I thought it might be a black rat snake, but that species is state-listed as endangered in Massachusetts, and it does not frequent the dry habitat of the Montague Plains. Racers range between thirty and sixty inches, or 90-150 centimeters. This specimen was on the upper end of the spectrum. I am more familiar with the smaller, blue-gray or yellowish brown versions of this species that can be found in Oregon. 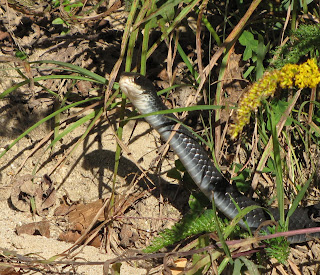 As I moved behind Lynn to try and get a better angle for photographing it, the snake began to test the air with its tongue in earnest. It turned and beat its retreat, vibrating its tail as many harmless snakes are wanton to do in imitation of venomous rattlesnakes. As suddenly as it had appeared it slipped away through the swishing dry grass.