Remember the bat that had flown into the house next door a few weeks ago? Well, I now live in that house, and the landlady was just beginning to breathe easier, thinking the bat had found its way out when….The evening of Monday, August 17 I came home from work and noticed movement out of the corner of my eye. Turns out the bat had been roosting on a window shade at the top of another entry door. 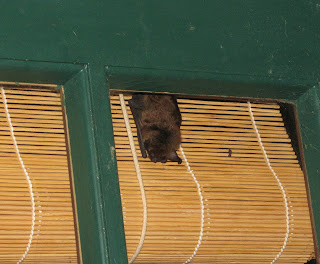 Fortunately, the shade was easily detached from the door, so I simply took the shade and the bat outside, much to the relief of my landlady. The bat flopped off the shade and into some plants along the edge of the back deck. It must have been exhausted, dehydrated, and hungry, at least if it had been in the house the whole time.

After snapping a few pictures of the creature, I decided I should probably try to hang it up on a tree trunk so it could eventually manage a take-off. The bat had other ideas. It was none to eager to receive my “help” and actually flew off from ground level, much to my amazement and relief. I was an instant hero to my landlady, but oh how things can change….

The next night, Tuesday, August 18, I arrived home to find my landlady utterly beside herself on the front porch steps. There were literally two of her there. No, I’m joking. Her mental state was not a laughing matter at all, actually. I did not know what was wrong, and the first words out of her mouth were “I’m going to have to sell my house.” Having just moved in, I was now in total shock myself.

It turns out that the bat was back, in the exact same place from which I had removed it the evening before. I reassured my landlady that this was an easy problem to deal with, but we should probably try and find out where the bat was entering the premises. After once again removing the bat (I attempted no “flight aid” this time), I set about looking for possible entry points.

This home was built in 1913, and trying to find one little crack or crevice where a bat could enter was futile. There are just too many possibilities. The chimney was an obvious choice, but the bottom was blocked by a layer of insulation. A bat would not have an easy time getting through, but it could be done. I decided that the bat must be a descendant of Houdini and let it go at that. My new plan was to simply remove the bat every time it showed up until it learned that it was going to be sent packing every time. I began the paperwork, but then remembered bats can’t read eviction notices.

Fortunately, we have not seen the bat since. I wish it were as easy to convince my landlady that bats are pretty harmless to people, and nothing to be afraid of. Not many people get a chance to see a wild bat up close, and I am sorry that this experience was an unpleasant one for her. Maybe someday I will show her the portrait I took of her uninvited houseguest before it left for the last time. I think it is rather cute, don’t you agree? 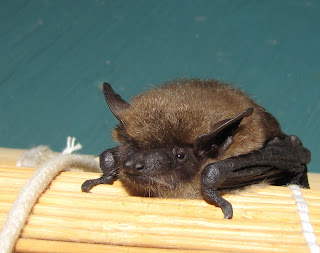