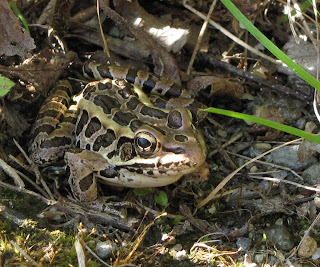 Never in my life as a naturalist have I ever seen as many frogs as I have here in western Massachusetts. They seem particularly abundant right now around ponds, rivers, even dry areas fairly far from water. Among the most common are pickerel frogs, Rana palustris.

I’ve been privileged to encounter several cooperative photographic subjects in the field at places like the High Ledges Wildlife Sanctuary and the Westfield River. One shy specimen hid under the shed at Dave Small’s house in Athol and happily gobbled up moths and other insects that, attracted by his mercury vapor light, fell to the ground beneath.

Pickerel frogs are easily mistaken for leopard frogs, Rana pipiens, the amphibian we all dissected in biology lab. Leopard frogs are identified by their round spots, while pickerel frogs have larger, nearly square blotches. Leopard frogs are in severe decline over much of their geographic range, however, due not to scalpels but to many environmental factors impacting most frogs. Acid rain, draining and filling of wetlands, and fungal disease are among the suspected reasons for their disappearance. 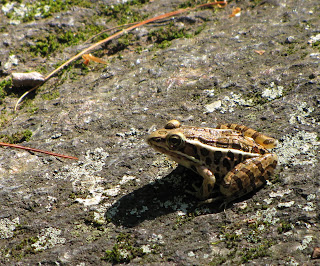 Pickerel frogs seem to be thriving by contrast, at least in my own experience this summer. Western Massachusetts did have an abnormally wet season, though, the wettest on record by some accounts, and there was certainly no shortage of areas for frogs to breed. It was difficult to avoid wet places in fact. Even so, I found many pickerels in perfectly dry (even downright hot) conditions at High Ledges Wildlife Sanctuary.

Male pickerel frogs call for mates by inflating a pair of vocal sacs in beneath their throat. Most references describe the sound they produce as a “snore,” but not having heard one I cannot say for myself. They started breeding from March to early May, before I arrived here.

The female frog lays her eggs in vernal (temporary) pools, usually near rivers or streams, and she is prolific. One egg mass can have from 700 to 3000 ova. Tadpoles can become frogs by the end of the summer, but it takes two years from egg to sexually mature adult.

I have to thank the people of Massachusetts for preserving a great deal of amphibian habitat; and thank the frogs themselves that were kind enough to not hop away too quickly while I fumbled with my camera. They are very photogenic, but perhaps they know that…. 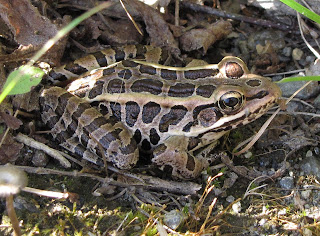