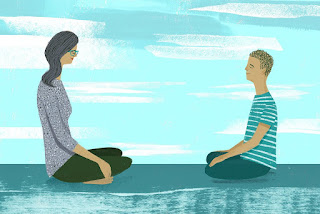 I recently posed a question to my friends in social media who are gun advocates, for lack of a better term. I asked what they were so afraid of. The overwhelming response was to avoid answering directly. Instead they offered the usual arguments for their position. One even suggested that there should be mandatory gun safety courses in middle school and/or high school, I cannot recall which. That met with some sharp replies and "wow" emojis. It got me thinking, though, about what else we might want to become mandatory in our society.

How about mandatory meditation? We need mindfulness more than ever now. Desperately, in fact. The ultimate in being proactive is not learning how to use a gun, it is learning how never to need one. Maybe we should be required to learn meditation, and to exercise it before we shoot off anything, from our mouths to our magnum .44s. I myself am not entirely sure what constitutes meditation. I know there are many different styles, some related to religions, others that are independent of any dogma, but I am embarrassed that I have not sought to learn more. It is unfortunate that meditation is something of a casualty of dismissing the "New Age" movement. Meditation is not a fad, nor a dinosaur. It is a life skill, emphasis on "life."

What is that long-standing joke? "I went to a fight and a hockey game broke out." How wonderful it would be if, metaphorically speaking, we went to a mass shooting and a yoga convention spontaneously occurred. Collectively, we have a profound disconnect between our minds and our bodies. We are over-stimulated and on edge almost every waking hour. Then we cannot get to sleep. Advertising has become a substitute for education, and so we believe that exercise must be vigorous, even violent like boxing, and can be accomplished in as little as what, fifteen minutes? We do workouts. We should be doing peace-ins.

"Did he say mandatory medication?" No, but we pretty much have that already, and it is both a blessing and a curse. Pharmaceutical companies are rich enough as it is, thank you, and the side effects of the drugs they are turning out are no doubt underplayed. Perhaps mandatory marijuana would be worth considering, though, to mellow everybody out. Here in Colorado we have decriminalized both medical and recreational use. We are still working out the kinks, but if it ever loses its stigma entirely, I like our chances of being a more peaceful community.

There are lots of things beginning with the letter "m" that might be nice if they were mandatory. Mandatory mediation is a cornerstone of the discipline known as restorative justice. It certainly de-escalates matters, and is arguably more effective in conflict resolution than traditional paths of legal recourse.

Mandatory music? Here is a facet of our school curricula that is often the first to be sacrificed as unnecessary, an "elective" and a frivolous use of our taxpayer dollars. Really? When was the last time you saw an angry, stressed-out musician? What about a hostile mob surrounding a solo musician in the subway station, at a bus stop, or on a public square? Music is energizing in a positive way, stress-relieving, and emotionally moving when it is at its best.

Homo sapiens, it can be argued, is a violent species because we do not practice peace and love. Again, we allow greeting card companies, candy manufacturers, and florists to educate us about what love is. It is none of that. Peace does not come from any commercial outlet. No weapon is a "Peacemaker," not even the Colt Single Action Army revolver of the old wild west.

The point is that we are all too well-prepared to be violent. No one is prepared to be peaceful. Mastery of weapons is a "death skill," not a life skill. How we define preparedness has to change if we want fewer incidents of mass carnage, if we want the very fabric of civilization to remain intact.